A drop in US bond yields exerted pressure on the dollar. This decline may have been brought about by the Fed’s report on economic growth in 2018 submitted to Congress. Growth in 2018 was estimated to be slightly below 3%, which has caused concern among investors. 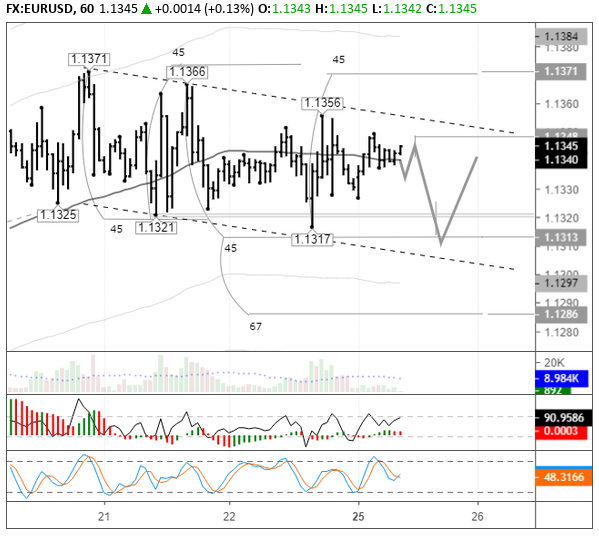 At the time of writing, the euro is trading at 1.1345. The situation hasn’t changed much over the last couple of weeks. The pair remains in a sideways trend, with the upper boundary expanding slightly to 1.1371. Volatility has subsided over the last 3 days, with the pair not even reaching the 45th degree. It’s currently trading around the balance line within a downwards channel.

In my forecast, I expect the pair to test the 45th degree (1.1313) from a high of 1.1366. Judging by the indicators on the H1 and H4 timeframes, there is still potential for growth, but for today, I’m going to go by the hourly cycles, which suggest that the pair will start a substantial upwards movement during the US session on the 26th of February.

Buyers have recovered Friday’s losses. Judging by trading volumes, we can surmise that there is an ongoing accumulation of long positions. If we’re going to get an upwards surge, we should, in theory, first revisit recent lows. As the stop levels of the smaller players get triggered, the limit orders of the bigger players will kick in. The big players need to exploit the smaller ones in order to enter more lucrative long positons.