EURUSD: bulls met with resistance around the 112th degree

In 3 days, the bulls have recovered the losses incurred after the ECB meeting on the 7th of March. On Tuesday the 12th of March, the euro rose to 1.1305 against the dollar on the back of a rally on the EURGBP pair as well as a broadly weaker dollar following the release of US inflation data, which fell short of expectations.

The UK parliament held a second vote on an EU withdrawal agreement. The motion was defeated by 391 votes to 242. The pound reacted with an 80-pip rise, although this was almost entirely cancelled out by the subsequent correction. The pound had risen by 300 pips ahead of the vote, so the bulls had already run out of steam and couldn’t continue the rally. 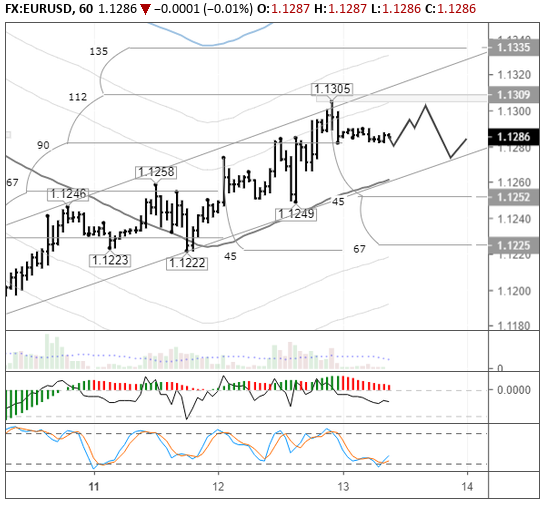 The bears didn’t manage to induce a breakout of the channel as the pound’s collapse provided support to the bulls via the EURGBP cross. The EURUSD pair’s rise then gathered pace after the release of US data. The US dollar lost ground across the board, and the euro jumped to 1.1305.

The current upwards movement is taking place within a channel with a range of 50 pips. A correction began from the upper boundary of the channel at the 112th degree. In today’s Asian session, the US dollar and the euro crosses showed mixed dynamics. As such, we may get a test of the 1.1305 mark.

The LB line and trend line run through 1.1264. If the downwards correction on the EURGBP cross deepens, the euro will drop against the dollar without the initial recovery to 1.1302.

The UK parliament should hold a vote today on a no-deal Brexit. If they vote against it, then there will be a vote on Thursday on moving the date of departure (29th of March) to a later date. Market volatility is expected to remain high.