EURUSD: test of the trend line likely ahead of the weekend

On Thursday the 14th of March, the euro slid to 1.1294 against the dollar after 4 days of growth. All the major pairs underwent a downwards correction as everyone had their eyes on the Brexit votes.

The UK parliament held votes on several amendments relating to the UK’s terms of exit from the EU. The House of Commons voted to delay the date of departure to the 30th of June assuming that the EU agrees to it on the 20th of March. Parliament also rejected the idea of a second referendum.

Theresa May will now head to Brussels to formally request an extension to Article 50 of the Lisbon Treaty. The EU27 will then have to make a unanimous decision on whether or not to move the date of departure. The pound is set to continue experiencing high levels of volatility over the coming days. 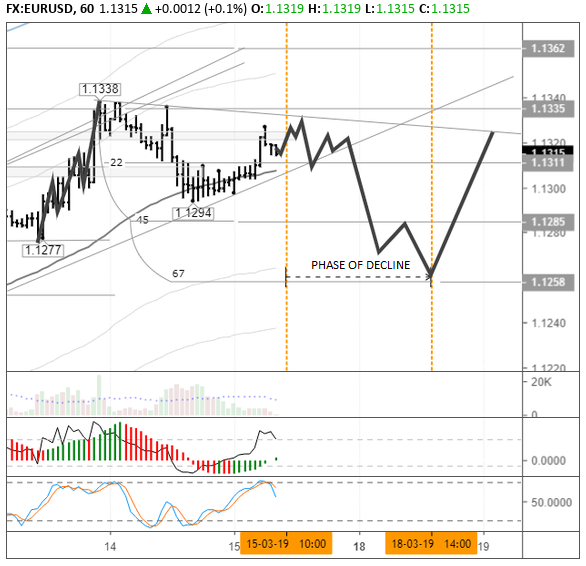 I didn’t make a forecast yesterday, although I was expecting a correction first and foremost given that the pair had rebounded from the 135th degree and was trading within the reversal zone. The bulls tried to restart the uptrend from the 22nd degree, but as we can see, the bullish impulse ran out of steam on the back of the US dollar’s rise. The pair revisited the trend line and the LB.

As we await the opening of the European session, the EURUSD pair is trading at 1.1317. The euro jumped to 1.1327 in Asia following a rise on the Aussie and Kiwi dollars. Since the trend line remains intact, and we’re awaiting further developments on Brexit, there’s still a chance of revisiting the 1.1338 mark. Moreover, US President Trump hinted in a statement that it would become clear in the next 3 - 4 weeks whether or not the US and China can reach a trade deal. This is good for risky assets, including the euro.

Today, the Eurozone will publish its inflation figures for February. This is the only thing that could have a short-lived effect on the euro. Annual CPI is expected to come out at 1.5%, with the core component at 1.0%. The monthly value, however, may post a decline of 0.1% against a previous reading of 0.3%.

In my forecast today, I’m expecting an unsuccessful test of 1.1330 as well as a test of the trend line. I’ve done the forecast up to the 19th of March so you can see my thoughts on the next few trading days. The decline to the 67th degree will only be possible after the bears break through the trend line. I’m predicting this break to happen on Monday, but it could happen in today’s US session.

From 10:00 (GMT 3) on the 15th of March to 14:00 on the 18th of March, the cycles show a phase of decline. Be warned that the cycles don’t take future events into account; they’re simply constructed on the basis of past price behavior and there’s no guarantee as to whether or not they’ll work. The fundamentals are more important than indicators and any methods of analysis.