On Wednesday the 20th of March, the bulls managed to close the day above 1.14. The highest point recorded during the day’s trading was 1.1448. The dollar collapsed during the US session following confirmation of the US Fed’s decision and the publication of the subsequent monetary policy statement.

All the Fed’s actions prompted speculators to short the dollar. After the two-day meeting, the Federal Reserve decided to maintain the key rate within the range of 2.25% to 2.5%. The accompanying monetary policy statement was more dovish than markets expected. Economic growth forecasts for 2019 and 2020 were downgraded. Expected growth this year was revised downwards from 2.3% to 2.1%, and next year from 2% to 1.9%.

The dollar’s collapse was caused by the Fed’s dot plots, which depict the opinions of FOMC members with regard to future interest rate hikes. They currently show that the federal funds rate will remain at its current level throughout the year, and be raised once in 2020. Moreover, the central bank plans to end its balance sheet reduction in September this year.

US10Y bond yields have dropped by 1.95% to 2.97%. All major currencies gained round against the dollar on the back of this. 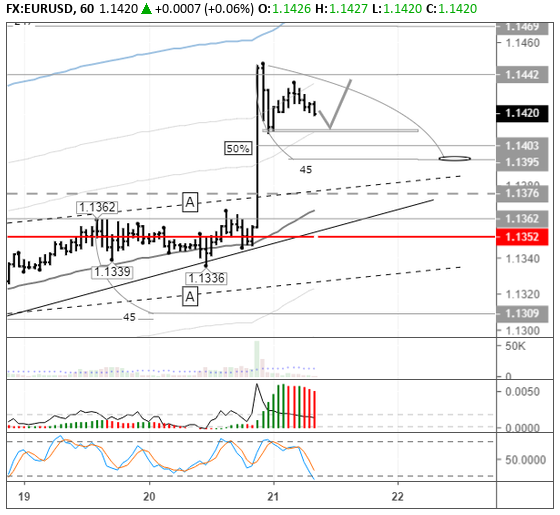 The European session saw another false breakout of the trend line. The euro descended to 1.1336 before making a sharp upwards reversal. The pair missed the lower target of 1.1325 by 11 pips. The EURUSD pair then went on to hit a new high on the back of the pound’s collapse and the resulting rise of the EURGBP cross. The bulls were unable to break the resistance at 1.1360 until the Fed’s rate decision was announced.

The Fed surprised markets with its dovish outlook. The dollar went into serious decline after it became clear that there wouldn’t be any rate hikes this year and the Fed downgraded their GDP forecasts. The regulator plans to end their balance sheet reduction in September. Market sentiment towards the dollar has taken a turn for the worse.

On the chart, I’ve highlighted the 50% level of the big candlestick. 1.1403 is a key level. If we drop below it, the bears will start pushing towards the 45th degree. I’ve mapped out a slow version of the downwards trajectory with an arc.

Considering that a lot of currencies and euro crosses are trading up, we’re likely to see a rebound via a double bottom. If pressure on the dollar increases, the euro bulls could break through to 1.1480. If we make it to the U3 line, rather than a downwards rebound, I think we can expect the pair to move in a saw tooth formation below the line.

The monthly candlestick is currently giving out a buy signal. It’s going to close in 6 days. My target for the beginning of June remains at 1.23.

Today’s central focus is the Bank of England’s meeting.