EURUSD: shorting euro crosses has weighed down on main pair

On Tuesday the 26th of March, the euro hit a new weekly low after an unsuccessful attempt at breaking the trend line. During the European session, the pair’s drop was brought about by a decline on the EURGBP cross as a result of news concerning Brexit. Pressure increased during the US session on the back of increased demand for the dollar. The greenback also got a boost from a rise in US 10-year bond yields.

I’ve long been under the impression that the statements of various officials are carefully planned to bring about price fluctuations on the markets at a certain time. While they may seem random from the sidelines, randomness is just a pattern you haven’t yet recognised.

Any official can give their personal opinion on a hot topic and have a marked influence on the market. They don’t face any consequences for this verbal manipulation of the market as they are simply expressing an opinion. Nevertheless, these expressions destabilise markets. 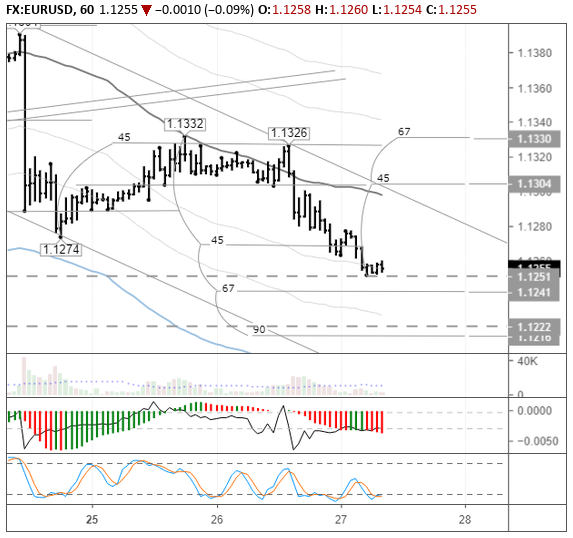 The pair fulfilled one third of my forecast yesterday. The breakout of the trend line turned out to be false. My predicted scenario became unworkable after the rate dropped below 1.1300. The euro bears improved their positions on the back of a strengthened dollar as they pushed the bulls back to 1.1251 (70% of the upwards movement from 1.1176 to 1.1448). Judging by trading volumes, this is a key support level. If the bears take it during the European session, I don’t think that the 67th degree will be able to withstand them and the pair will slump to 1.1222.

I wrote above that the highly correlated EURUSD and GBPUSD pairs have diverged. Now it’s time to find a balance point between them so that they can start moving in the same direction again. Either the pound will drop, and the euro will stay at 1.1257 and wait for the pound to catch up, or the euro will shoot upwards and the pound will keep trading at 1.3180.

I’ve decided not to make a prediction today pending further developments on Brexit and given the upcoming trade talks between the US and China (a new round of talks is set to take place on the 28th and 29th of March in China). I’ll simply state my target levels: 1.1220 (target for bears), and 1.1293 (target for bulls; the LB and trend lines).