On Friday the 29th of March, trading on the EURUSD pair closed slightly down. Market volatility was high throughout the day. The pair dropped to the 1.1212 mark before rebounding to 1.1247 ( 35 pips). On the hourly timeframe, the low and high appeared on the chart a few hours after they did on the British pound. This lag was due to the dynamics of the EURGBP cross, which made a swing in the wake of news from the UK that parliament had once again voted down Theresa May’s Brexit deal. This was the 3rd time lawmakers rejected the deal, this time with 344 votes for and 286 against. On the back of this result, the EURUSD pair slid to 1.1213. 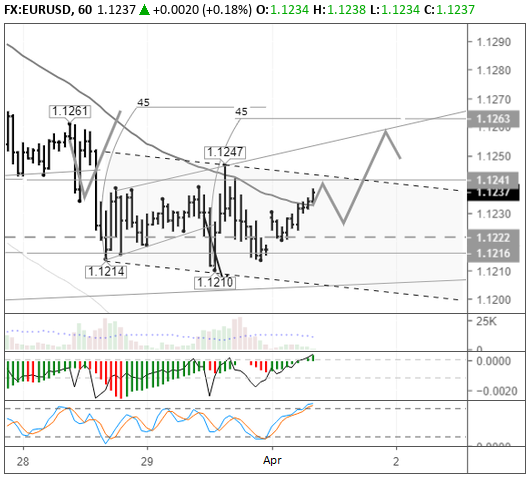 In Friday’s European session, the pair dipped as it did on Thursday to surpass the 1.1214 low by 4 pips before shooting back upwards. Although the fluctuations were caused by developments in the news, the trajectory panned out the same way.

Trading on the euro has opened up against the dollar today. Chinese data released over the weekend has provided support to risky currencies. The services and manufacturing PMIs came out better than expected.

In Asia, the pair jumped to 1.1242. The EURUSD and GBPUSD pairs rose in tandem. As the upper boundary of the channel was reached, the euro reversed downwards. As the stochastic is in the sell zone, I expect to see a downwards correction to the growth seen in Asia ahead of the US session.

If we don’t get any negative news about Brexit or the trade talks between the US and China, we’re likely to see a test of 1.1258/65. If the rate starts to drop, keep an eye on 1.1220 as well as the dynamics of the yen. This level has to hold up for there to be any further growth prospects, and the yen has to drop against all the majors.