EURUSD: the bears have broken a key support

On Wednesday the 24th of April, trading on the euro closed down. In the US session, the bears broke an important support at 1.1170. Buyers tried to recover from this, but a lot of stop levels were activated below this level and the broadly stronger dollar pushed the euro further down to 1.1141.

The greenback showed some purposeful growth amid an aversion to risk on the market following weak data from Australia and Germany. All components of the German IFO report for April came out lower than in March.

The dollar was also boosted by the Canadian dollar’s decline. The loonie lost ground after the BoC’s decision to leave interest rates unchanged at 1.75%, while also downgrading their economic outlook. The regulator said that economic growth in the first half of 2019 will be lower than expected, but will pick up in the second half.

During the press conference, BoC Governor Steven Poloz noted that if the forecasts are accurate, then the bank is more likely to raise interest rates in the future than to lower them. This calmed markets as they now know that all they need to do is keep an eye on economic indicators. 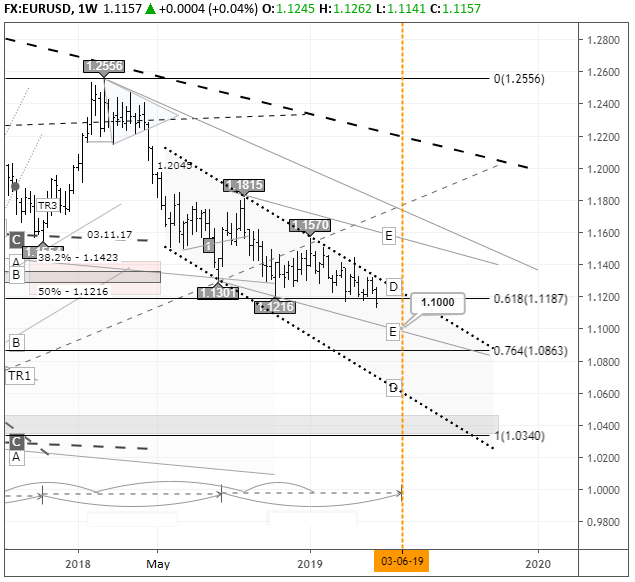 The global economic slowdown, trade wars, Brexit, and the softened stance of ECB President Mario Draghi have all sent the pair south. This has lost us some time. Even if we suppose that the euro will start rising now at the same pace as the bullish trend from 2017, it won’t reach 1.23 until the 25th of November this year.

I’ve included the pair’s weekly chart today instead of the hourly one in order to give a bird’s eye view of the pair’s trajectory. The euro is declining within the D-D channel. The pair hasn’t strayed too far from the 61.8% Fibo yet, so the closing price is very important.

Traders are now all awaiting US GDP data for Q1. If the figures disappoint, and the weekly candlestick closes above 1.1187, this will be confirmation of a false breakout. Since we’ve already got three lower lows on the weekly timeframe, from a technical point of view, the rebound could be strong. If GDP figures are seriously good, the immediate target will be 1.10 at the lower boundary of the E-E channel. After 1.10, the road is open towards 1.0863 (76.4%).