EURUSD: pair trading between the 112th and 135th Gann levels

On Monday the 3rd of June, the euro gained a hundred pips against the dollar to reach 1.1262. The US trade saga took its toll on global markets. Due to the ongoing economic slowdown, traders and investors are expecting interest rates to be slashed by the US Fed before the year is out.

The greenback came under pressure from the ISM index, which showed a decline in manufacturing activity despite expectations of a rise. The ISM manufacturing index came out at 52.1 points.

Pressure on the dollar further increased following remarks from FOMC member James Bullard, who said that a rate slash may be appropriate sooner rather than later given current trade and inflation risks. Federal Reserve vice chair Richard Clarida also talked about slashing the key rate on Friday. 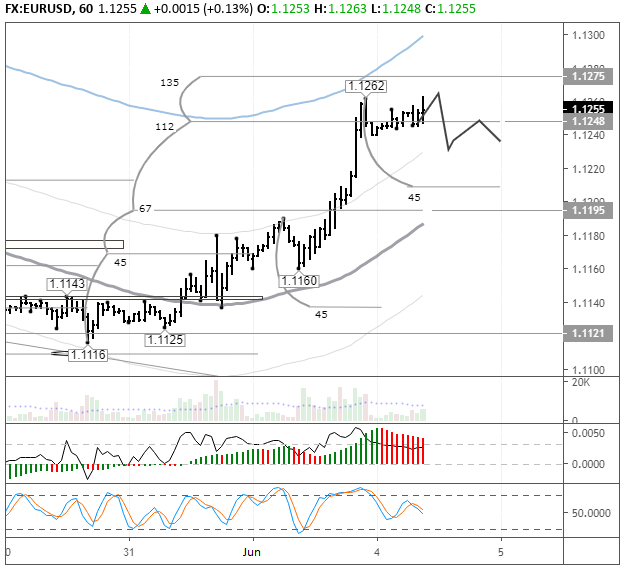 Expectations that the Federal Reserve will lower rates by the end of the year have had a negative influence on the dollar. Rather than retreating to the safe havens, traders have been closing their long positions on the dollar. According to the latest data from CME FedWatch, the probability of interest rates being slashed in October is 94.3% and 97% in December.

At the time of writing, the euro is trading at 1.1261. The EURUSD pair is trading between the 112th and 135th degrees. This is a reversal zone, so from here or 1.1275 I expect to see a correction. While the dollar is trading down against the majors, don’t be in a hurry to short the euro against the session trend. There’s a risk of retreating to the U3 line. To sell we need to see a reversal candlestick formation (pin bar, or bearish engulfing).