EURUSD: euro gains a foothold at the 67th degree

On Tuesday the 27th of August, trading on the euro closed slightly down. Initial growth was snuffed out by the trend line at 1.1116. In the US session, the EURUSD pair slid to the 67th degree at 1.1085.

The single currency came under pressure via the EURGBP pair, which dropped from 0.9095 to 0.9016 on the back of a rising pound. Leader of the UK’s opposition Labour Party Jeremy Corbyn has said the he will do everything he can to prevent the UK leaving the EU without a deal. The opposition parties have made a pact to use any legal means necessary to prevent a no-deal Brexit on the 31st of October.

The pound was the only major to make gains against the dollar. Most currencies have lost ground against the dollar amid a retreat towards the safe havens by investors, who are skeptical of Donald Trump’s optimistic suggestion that a trade deal could be reached by September. Trump said on Monday that he received a call from China asking him to return to the negotiating table. China’s foreign ministry has denied making any such calls. 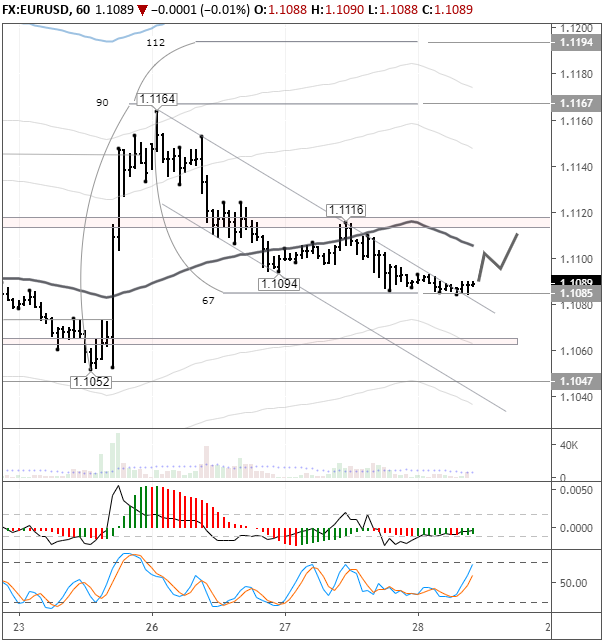 At the time of writing, the euro is trading at 1.1089. As predicted yesterday, the pair reached the 67th degree, but the ensuing rebound was weak due to the EURGBP pair putting pressure on the bulls. All the majors are trading down against the greenback in today’s Asian session. The euro has lost the least ground at -0.01%. Despite the drop on the majors, it seems likely that the euro will rise against the dollar today.