On Wednesday the 4th of September, trading on the euro closed up. The single currency’s rise was helped along by several factors: a broadly weaker dollar, reduced tensions in Hong Kong, and improved political situations in Italy and the UK.

The market’s appetite for risk has increased in today’s Asian session following the publication of Chinese PMI data. The pound has recovered from its low point following a vote in parliament. The House of Commons debated a bill that could delay the UK’s departure from the EU by forcing the government to seek an extension.

Italian Prime Minister Giuseppe Conte has reached a deal on forming a new coalition government. The day ended with news that Hong Kong leader Carrie Lam has officially announced the withdrawal of the extradition bill that sparked the protests. 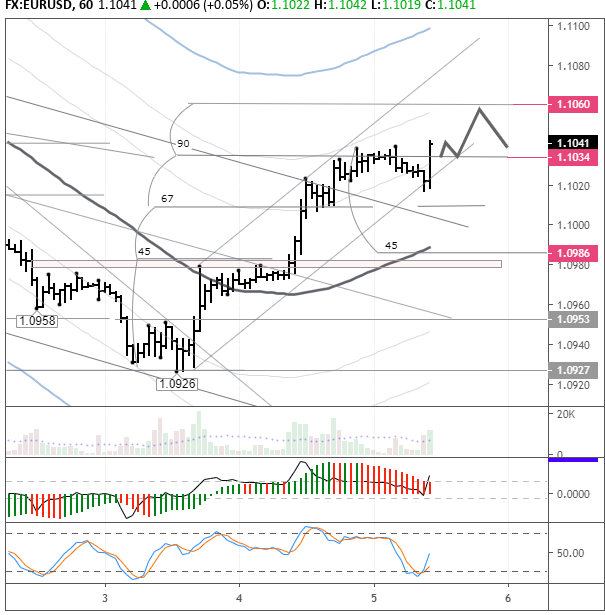 The pair rose to the 67th degree as expected. The news even sent it past this mark to reach the 90th degree. After a correction to 1.1017, the pair recovered to 1.1035. The bulls are preparing to push on higher to the 112th degree at 1.1060. There are no technical barriers to achieving this. The U3 MA line runs through 1.1099. The pair could make it this far if the dollar continues its downward correction against the majors.

High volatility is expected in today’s US session with the release of employment data. Ahead of the payrolls report, there are a lot of important statistics being released that could have an effect on market sentiment as well as US bond yields.