On Tuesday the 1st of October, trading on the euro closed up. The pair spent most of its time in a sideways trend. During the day, the rising crosses pushed the EURUSD pair up to 1.0908 following a rise in German 10-year bond yields. The pair shot up from 1.0885 to 1.0943 on the back of weak US data.

The ISM manufacturing PMI dropped from 49.1 to 47.8 (its lowest value since June 2009). Any value below 50 is typically indicative of a slowdown in manufacturing activity. 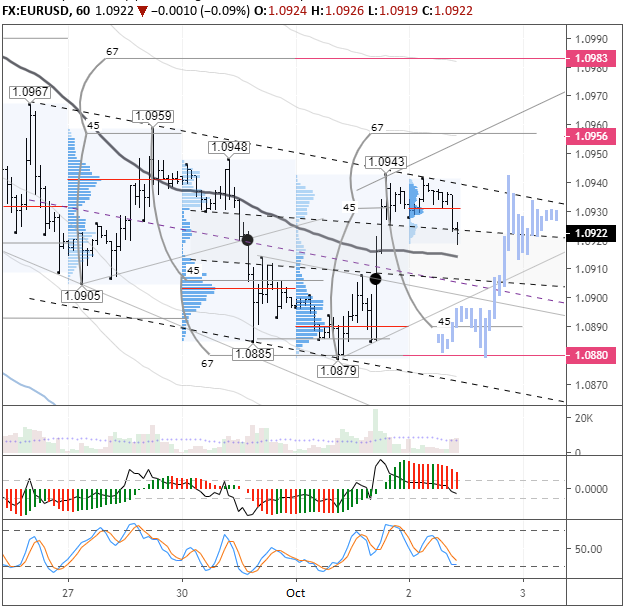 Since the 26th of September, the euro has been fluctuating amid mixed data. The price has been tending downwards within a complex structure. The growth on Tuesday ran out of steam at the upper boundary of the channel. We were expecting this level to be broken on the 30th of September, but the bulls were beaten back to 1.0885.

The last two days have seen near-identical trading volumes with the pair moving in opposite directions, and 70% of it taking place in the lower half of the price range. The rate dropped sharply on the 30th of September, after which the pair traded sideways as the volume built up. The pair initially traded within the lower half of the range on the 1st of October before moving to 1.0943.

Yesterday, we mentioned that there is a lack of drivers for the euro to grow, except for within a correction to the broadly weaker dollar. The pair bounced from the upper line of the channel. Another channel has formed within this one. There are signs of a reversal, but we’re keeping an eye on the lower highs. This is a bad sign for buyers.

One news item has caught our eye. The Atlanta Fed has projected a 1.8% rise in US GDP for Q3 against a previous forecast of 2.1%. The third quarter has now come to an end. The first reading of US GDP will soon be published. If it comes out at 1.8%, the euro will rise, as markets will again start factoring in a rate slash by the Fed. For now, we’re keeping an eye on the market from the sidelines.