EURUSD: bulls continue the movement from the LB line

The EURUSD pair closed 0.11% up on Friday. Volatility was high during the US session following the release of employment data. The statistics were pretty good, abating fears of an impending recession in the US. Unemployment dropped, while the figures for July and August were revised upwards. One negative part of the data release were the figures on earnings.

The effects of the employment report were short-lived due to the fact that investors had their attention turned more towards political tensions in the US as well as the upcoming trade talks with China.

The euro rose to 1.0997 before slipping to 1.0957. Comments from Fed Chair Jerome Powell had no effect on markets. The EURUSD pair found equilibrium at 1.0980. 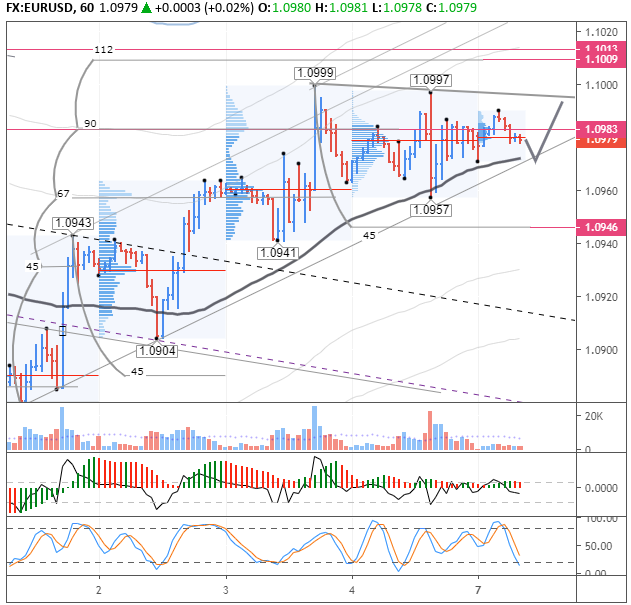 At the time of writing, the euro is trading at 1.0977. The pair is trading above the trend line and balance line. The stochastic oscillator is in the buy zone. The conditions are ripe for a surge towards the upper boundary of the wedge formation (1.0995) as trading gets underway in Europe. Since today is Monday, the pair is unlikely to go any higher than 1.10.

There aren’t any hugely important events in the economic calendar. There’s a resistance zone of 1.1009 to 1.1013 for bulls, as well as at 1.1040 from the upwards channel. The trend line is at 1.0971. A breakout here (closing the hour below this line) would rule out any chances of growth. Given the stochastic, however, this could be a false breakout, so stay sharp.