EURUSD: bears testing the strength of the trend line

The decline on the US dollar index has ended. Monday’s candlestick remained within Friday’s range. The DXY index still closed down, but not by much in comparison to last week.

We’re starting to see signs of an impending upwards correction. Since the dollar collapsed on the back of geopolitical developments, technical factors currently don’t wield much influence. Only trading robots are sticking to their algorithms and completely ignoring the fundamentals. If a sell signal is formed against the trend, a short position is opened. But who knows, maybe some people have disabled their Expert Advisors until the Brexit situation is resolved. 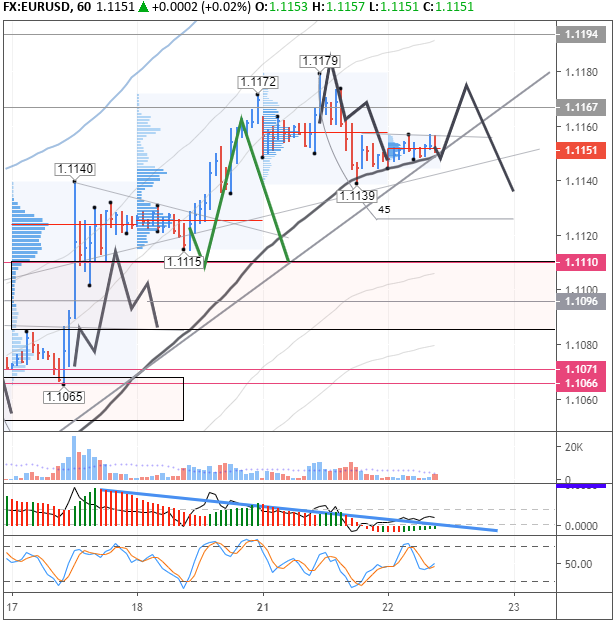 Expectations of a correction were met. The pair revisited Friday’s high and reversed downwards. It missed the projected target by a few pips.

The euro is trading at 1.1151. The Kiwi, Aussie, and pound are trading up against most of the majors, so today’s forecast will be similar to yesterday’s. The only difference is that we don’t expect a fresh high today. Before breaking through the trend line, there’s likely to be a bounce, which will help gather momentum for the breakout. The pair could retrace 76% of yesterday’s drop.

The EURGBP cross is in the red. This means that the euro crosses are under pressure. Today’s calendar is devoid of any significant events, although it’s still worth keeping an eye on UK data.

Another discussion will take place on the Brexit deal in the British parliament today, after which a vote will take place. There may be talk on Wednesday of a second referendum. The boat might also be rocked by talk of a snap election.

In conclusion, the bullish impulse is waning. However, before we get a downwards correction, a false upwards breakout is possible. Around 1.1126 and 1.1110 is a good area for a correction.