On Tuesday the 5th of November, trading on the single currency closed 0.48% down against the dollar. The pair declined along with the euro crosses amid a broadly stronger dollar following strong services PMI data.

The ISM non-manufacturing index in October rose from 52.6 to 54.7 points (against a forecast of 53.8). The probability of a rate slash in December has fallen. CME puts the likelihood of a December rate hike at 94.8%. This news led to a rise in US bond yields. 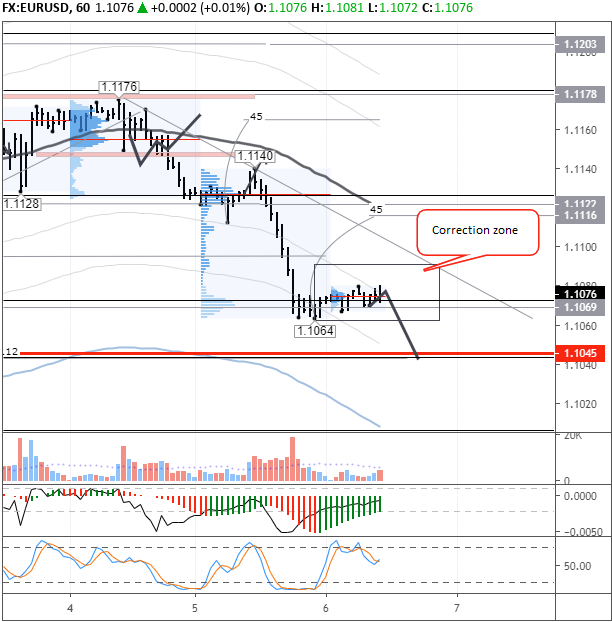 On Tuesday we expected a recovery to the balance line. Growth was mitigated by news coming from the UK. Traders began ditching the euro for the pound on the EURGBP cross. The drop gathered pace in the US session to mark a total drop of 90 degrees.

Now the situation is as follows. A double top has formed between 31/10 and 04/11 on the hourly timeframe, and this model has now been confirmed on the H8 timeframe. Markets have already factored in a trade deal being concluded by the US and China, giving the impression that the rise was used to close long positions and open shorts.

The pair stopped at the 90th degree, while the 112th degree at 1.1043 is a reversal level. We’ve highlighted a correction zone within a rectangle on the chart. The market is technically ready for a decline. We now await a bullish divergence on the AO. Long positions will become viable after a breakout of the trend line at 1.1075.