EURUSD: price touches down at the balance line

On Wednesday the 4th of December, the euro was down by four points at the end of trading. In the American session, bulls pushed the price to a new high of 1.1116. This was made possible due to three main factors: the Bloomberg report, weak ADP and ISM indices.

Bloomberg reported that the United States and China are close to an agreement on the amount of tariffs that will be cancelled as part of the first phase of the trade deal. Investors inferred from this report that there is still a real chance for the trade agreement to be signed before December 15. 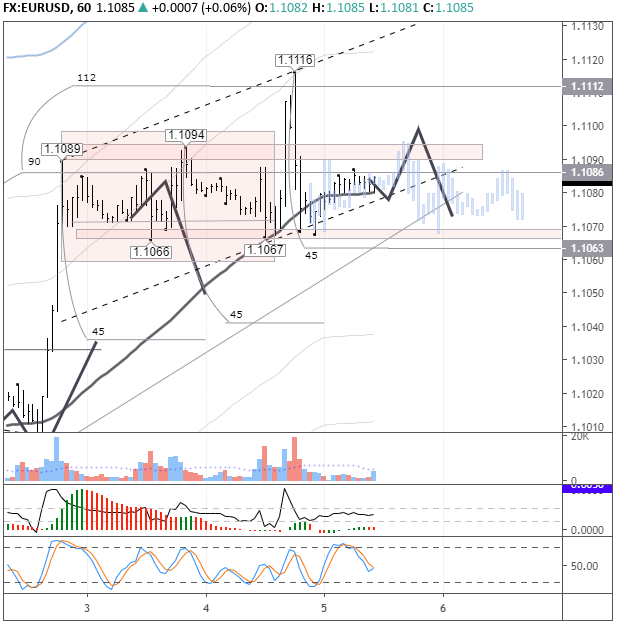 The target forecast for December 3 was never realised. The unexpected release of Bloomberg’s report and the publishing of weak statistics out of the US supported the “eurobulls”. The balance point shifted from 1.1050 to 1.1080.

US President Donald Trump said that the signing of a trade agreement with China may be delayed until after the US presidential election, which will be held in November next year. Yet after the Bloomberg report, there was talk that the deal would be concluded before December 15, 2019. Today, the market is optimistic about the UK general election in the UK and Brexit. In Europe, the pound hit a new high.

A candlestick with a long vertical shadow formed on the daily TF. A reversal pattern on the bell, but the background news was more significant. Following the pound, bulls can easily block an evening fall of the pair. The key support area is now located between 1.1070-1.1080. We can probably expect a flat formation according to the template laid out by the events of December 3-4. If the support of 1.1065 is maintained up to the release of the payroll report, and the results disappoint market players, then the euro is nailed on to soar to 1.1135. There is no correlation between ADP and NFP, but nevertheless, market players consider them and if there are technical factors, they will use the moment to exit the market and take up positions in preparation of the release of further important news.