On Friday, GBP was the growth leader, AUS was the outsider.

At the close of Friday’s trading, the EURUSD pair ended up down nine points. After the price rallied to 1.1199, the price returned to 1.1112 (-87 points). Bulls lost all profits.

US President Donald Trump and Chinese officials said on Friday that they had agreed on the “first phase” of the trade deal. The two sides reached an agreement according to which Washington will suspend the introduction of tariffs on Chinese imports scheduled for Sunday, and Beijing, in turn, will intensify its purchase of American agricultural products. The trade agreement will be signed in early January in Washington.

The Conservative victory in the UK general election has already faded into the background, as Boris Johnson still needs to complete the deal to seal the UK’s withdrawal from the EU. It is believed that discussions regarding Brexit will be held in parliament and the country will formally leave the EU next year. 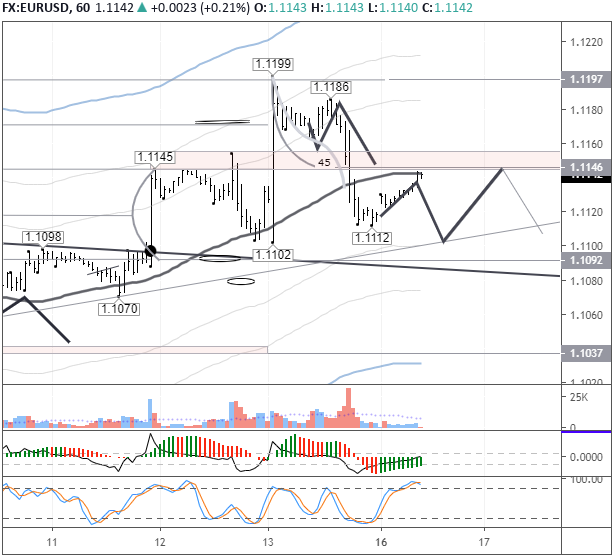 Friday’s expectations were fully justified. The price recovered to 1.1186, from which it slipped back fown to the 1.1112 level. Bears were almost able to block any overnight growth, which led to a daylight candle with a long upper shadow after closing.

In Asian trading, the euro followed the example of GBP, and rose against the dollar. There is still a market demand for risky assets after the first part of the trade deal between the US and China was negotiated, as well as the Conservative Party victory in the UK general election.

At the time of writing, the euro is worth 1.1141. The price reached the balance line and the resistance zone, which acted as support on Friday. Today we are inclined to see a flat correction between levels 1,1100-1,1145. According to the forecast, we can expect depreciation to 1.1102, and in the US session recovery to 1.1132. After the fall, growth to 1.1145 will come on Tuesday. If the price adheres to the forecast, then as far as the euro is concerned, we can start to consider the market’s readiness to move to 1.1050.