On Monday the 23rd of December, the euro was slightly up at the end of trading. As part of the correction, the euro recovered to 1.1096. In European trading, the single currency was supported by the EURGBP cross, which grew in value off the back of the pound’s collapse against the dollar. Weak stats published in the US also brought in support during the American session.

The GBPUSD pair fell by 127 points, to 1.2905. Concerns about a hard Brexit have intensified again amongst market players. The pound lost all gains made after the Conservative victory in the UK general election - we believe that someone is trying to rock the market before the Christmas and New Year holidays.

The publication of weak American statistics shook the dollar. Data concerning orders for durable goods came out worse than expected – with a decrease of 2.0% (MoM) in November. This was largely due to a fall in civil aviation and defense orders, but there were some slight improvements elsewhere. 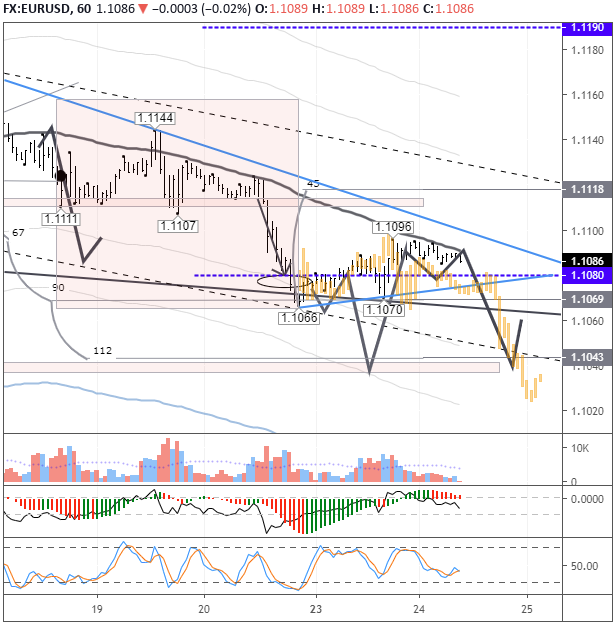 The forecast target was not achieved. Given events of the Asian session, the correction from 1.1066 looks very similar to the correction from 1.1111 (the correction is highlighted on the chart above). The price is now under the balance line and is ready to fall to 1.1043. In addition, the economic calendar is empty. We are not considering a fall to below the indicated level, since today the market closes at 21:00 terminal time. The target 1.1043 is located on the lower line of the downwards channel (indicated by the dashed lines). If everything works out to plan, and a sharp rebound follows from the 1.1020-1.1045 zone, then from Thursday, we can expect to see the euro gain in strength until the turn of the year.