On Wednesday, January 22, the euro was up 0.09% at the close. A positive attitude towards the major currencies resulted from the growth of the GBP, which strengthened across the board on the back of positive economic data and news regarding Brexit.

The House of Lords of the UK Parliament approved the Brexit bill, meaning that on January 31, Great Britain will leave the European Union – all that is left is for the agreement to be ratified by the EU Parliament.

At the American session, pressure was exerted on the euro by data from the US real estate market, which exceeded forecasts and the previous results. House sales hit their highest figures in almost two years (5.4 million, the forecast was 5.35 million). 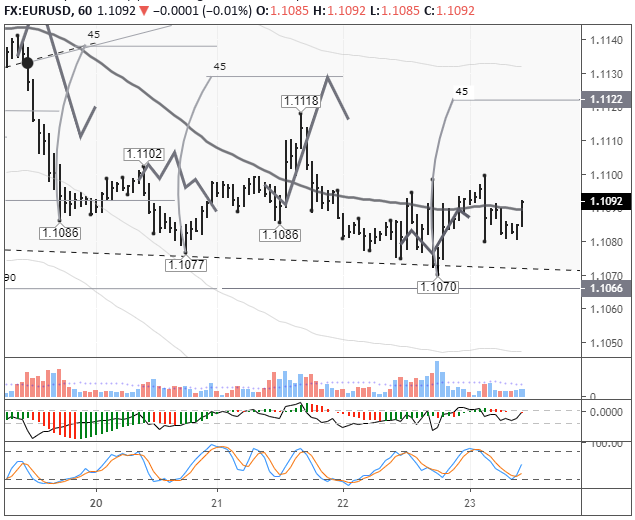 Yesterday's expectations came true. There is no forecast due to the ECB meeting and Christine Lagarde’s press conference, scheduled for later in the day. Investors are not quite used to her yet, so it is difficult to take into account the mood of the crowd when making a forecast.

In addition to the press conference, President Trump’s statement had a negative impact on the euro. In an interview with Fox News on Wednesday, he said that if the US and the EU do not reach an agreement on trade, Washington will impose a 25% duty on the import of European cars. There is also political uncertainty in Italy. The leader of the Five Star Movement, which forms part of the government, announced his resignation.

At the time of writing, the euro is worth 1.1091. The price is near the balance line (Lb). Euro crosses are showing mixed dynamics. If buyers can somehow gain a foothold above 1.11, then the road to 1.1122 will open for them. In any case, we wouldn’t advise making any forays into the market before the Lagarde press conference.