On Monday the 22nd of June, trading on the euro closed up. The single currency rose to 1.1270 against the dollar. Investors seemed to have forgotten about the coronavirus and the statement made by the WHO. They were more focused on the possibility of further government stimulus measures.

Last Thursday, the Democrats in the House of Representatives introduced a bill that would invest 1.5tn USD in infrastructure. Donald Trump said that he’d prefer to issue another round of stimulus checks.

The pair’s rise gathered pace following comments from White House economic adviser Larry Kudlow, who said that there is no second coronavirus wave in the US. There have been surges in infections in some US states, but no second wave. Investors took this as a bullish sign, and US indices rose, along with demand for risky assets. 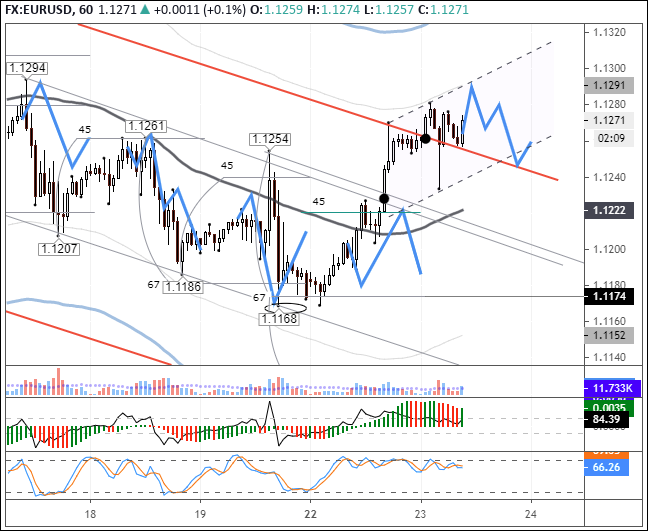 Monday’s movements went against Friday’s. Markets weren’t expecting the euro-bulls to push the rate up as far as 1.1270 on the first day of the week. In this morning’s Asian session, the rate reached 1.1281 before dropping back to 1.1233.

The decline was brought about by an interview on Fox News, where Pete Navarro, Trump’s trade adviser, said that the trade deal with China is over. Traders took this to mean that the agreement had been torn up. Navarro later clarified that he had meant that the deal had been completed, and not that it had broken down. After that, the EURUSD pair recovered to 1.1276.

The current situation is similar to what happened between the 12th and 15th of June, when the euro recovered from 1.1213 to 1.1353. The latest movements even mimic the previous trajectory. On the 16th of June, the euro sharply collapsed and erased all its gains. Morning rumours didn’t come to anything, but the bears still managed to significantly weaken the euro. Now we have a different situation. We’re forecasting a fresh high followed by a correction to 1.1250. Since the trend line is broken, the bulls now have their sights set on 1.1335.