The euro advanced 0.34% to 1.1802 by the end of the trading session on Tuesday, August 4. Yesterday’s price action was quite similar to the trend seen on Monday. And as expected, market participants were sensitive to the fixed income market.

Before the opening of the US session, the EURUSD pair dropped to 1.1721. The euro may have come under pressure on the back of Covid-19-related news. Suzanne Yona, chairwoman of Marburger Bund, an association of German doctors, believes that the second wave of the coronavirus pandemic has already begun in Germany. The German edition of Augsburger Allgemeine wrote about this on Tuesday.

Ten-year US bond yields fell sharply during the US session. The price of gold exceeded $2,000/oz, retracing to an all-time high. The decline in the dollar index was driven by rumors that the scope of the new economic relief plan might not be $1 trln, but $3 trln. 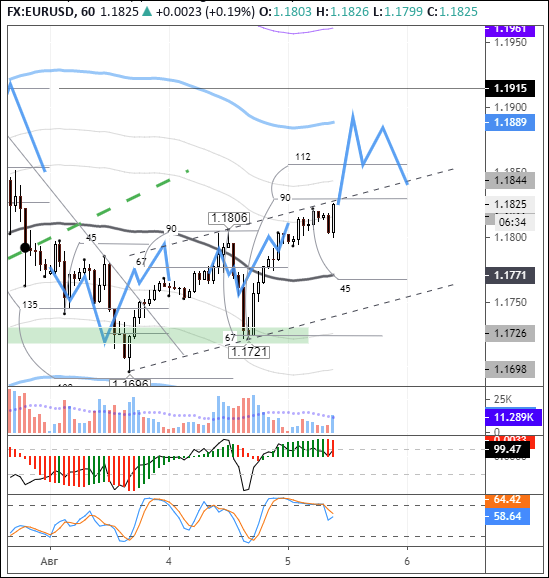 The EURUSD pair rose to 1.1822 during Asian trading. Stateside, Congress is still dragging its feet on the economic relief package. Treasury Secretary Mnuchin was quoted earlier as saying that the talks would last at least another week. Yesterday he said that Congress would attempt to hammer out a consensus by the end of this week.

Negotiations between the US and China are slated to resume on August 15. Leaders will meet to check the execution of the first phase of the trade agreement. Given the deterioration in relations between the US and China, the news flow surrounding the talks will take front and center stage. To remind, US authorities recently shut down the Chinese consulate in Houston. In retaliation for this move, China closed the US consulate in Chengdu.

The White House also issued an ultimatum to the Chinese social media platform TikTok. Trump said he plans to ban the TikTok app, owned by Chinese company ByteDance, from operating in the country.

US macro data will be under the spotlight on Wednesday. We await the release of the ISM non-manufacturing business activity, while the July nonfarm payroll report is due out on Friday.