Despite the lack of headway in Brexit talks, the pound strengthened from 1.3054 to 1.3170. Buyers pushed ahead with the corrective movement towards Friday's decline from 1.3255 to 1.3059. They even brushed off lackluster retail data.

Positive market sentiment was driven by news about the negotiations between the US and China. Telephone calls between trade representatives of the two countries were successful. The parties re-committed to their obligations under the January arrangements. Navarro, a spokesman for the Trump administration, said that phase one of the trade agreement between China and the US remains on track.

On Tuesday, the key pair moved higher, but stopped short of reaching the 1.1865 target level. The euro came under pressure from a pullback in EURBGP cross pair, so the euro bulls ran out of steam and were unable to build on earlier gains during the North American trading session.

No key macro releases will come out of Europe today. Heightened volatility should be expected in the North American session after durable goods orders for July are released stateside. Investors are also gearing up for a speech by Fed Chairman Jerome Powell at the Jackson Hole symposium (Thursday), while Hurricane Laura is set to make landfall on the Gulf Coast later this evening.

Notably, Hurricane Laura is barreling across the Gulf of Mexico at a speed of 130 kph. A tropical storm is upgraded to hurricane status when the wind speed exceeds 120 kph. Laura is expected to approach the Gulf Coast as a category 3 hurricane (wind speed of 180-210 kph).

Meanwhile, Tropical Storm Mario weakened, whereas Laura intensified. The authorities of Texas and Louisiana ordered the evacuation of 585,000 people. Authorities warned residents about possible flooding and told them to prepare for the worst-case scenario.

Experts expect Laura to wreak considerable havoc. The category of this hurricane should be tracked since authorities incur high costs to rebuild a state in the wake of such events, and the destruction may initially exert a negative impact on the US dollar. Following the recovery, the dollar could tap into positive sentiment due to an uptick in new jobs.

European trading opened lower, with the corrective movement breaking through the trendline to the downside. The technical picture for the euro looks favorable, so we expect the single currency to rebound to 1.1830 from 1.1795, and to 1.1880 on Thursday. A pullback below 1.1770 make will snuff out the upward trend. EURUSD is currently under pressure from crosses, so buyers in the main pair will have to fight it out for every single basis point. 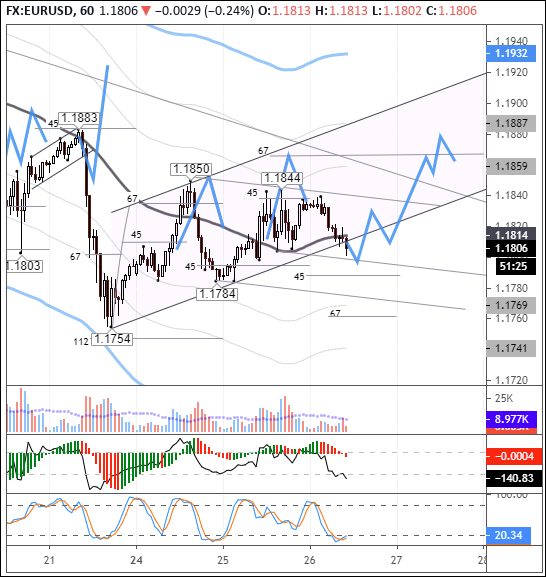