EURUSD: euro retraces to high of 1.1997 in Asian trading

Earlier this week, dollar selling picked up momentum after positive macro data out of China pointed to continuing growth of service sector activity in August. A lull in Sino-US relations stoked bullish sentiment in risk assets. Traders began to sell the dollar as the European trading session opened.

Following the Fed’s decision to switch over to inflation targeting, market participants apparently decided to push the dollar index (DXY) down to a new bottom. Over the past four months, the DXY has declined 8.52% to 91.99. A new low of 91.78 was set in today’s Asian trading. Sellers have broken through the trendline on the monthly timeframe. If September closes below 92, the dollar index will head lower towards 88.35.

Today’s Asian macro releases included the Caixin and Markit manufacturing PMI data. The readings showed that the index of business activity in Chinese industry for August rose to 53.1 from 52.8 in July. The index pointed north for the fourth month in a row and reached its highest level since January 2011.

The euro bulls shattered the earlier chart pattern that had been shaping up. As a matter of fact, we now have a wedge-shaped model with four tops. Furthermore, today’s move up to 1.1997 put an end to the double “bearish” divergence. The current model does not look good in any way for buyers. Support is at 1.1957 on the trendline from a low of 1.1763.

After trading opened in Europe, players have not followed the trend that took hold during the Asian session. The euro is currently hovering around 1.1967. The price action around 1.1957 should now be closely watched. In case of a breakout at this resistance level, the closing of long positions can be expected to increase (fixing). In order for the rally to continue, buyers need to defend the 1.1943 mark today, otherwise 1.997 could end up as being this week's high. We decline to issue a forecast for today since not a single price movement option has yet to be seen. 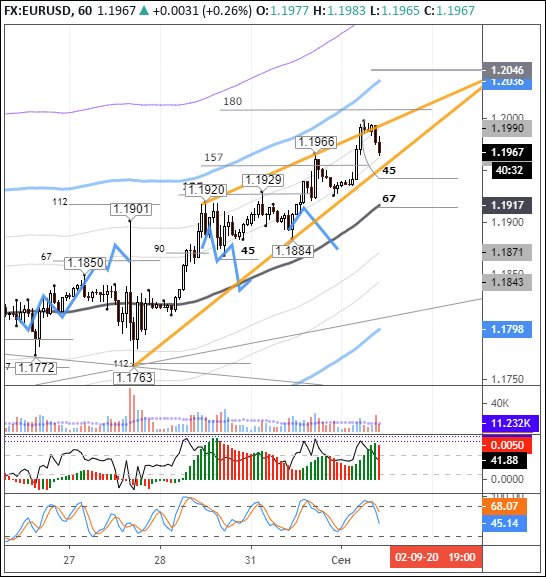