Euro reverts to correction after failing to hold above 1.20

The euro traded down 0.21% on Tuesday, September 1. After the bulls mustered an unsuccessful attempt to gain a foothold above 1.20, the pair sank to 1.1905.

During the first half of the session, EURUSD rose to 1.2011 in the wake of strong manufacturing and services sector PMI data points that came out of China on Monday and Tuesday.

The greenback gained support in the North American session, after robust macro data came out stateside. Notably, manufacturing activity in the country grew at a faster pace in August than expected. The ISM Manufacturing Index rose to 56.0 in August, up from 54.2 in the previous month (and vs. the median forecast of 54.5). The manufacturing sector managed to sustain its recovery despite the summer outbreak of COVID-19 hotspots.

On the hourly timeframe, the narrowing pattern had five peaks. The euro repeated the plunge in the Swiss franc with a delay of seven hours. Meanwhile, the USDCHF pair had fewer peaks than the EURUSD pair. Pressure on the euro eased at 1.1900 (90th degree of the Gann angle).

In Asia, sellers retraced to the low at 1.1891. Rebound territory lies within the range of 1.1847-1.1875. Yesterday's daily candle closed with a long shadow and a bearish body. The key pair broke out of the low in morning trading even as pressure on the euro continues to build. Sellers also met with resistance from buyers. Three lows were formed.

The price action should be carefully watched at this point. The first impulse wave from 1.2011 to 1.1901 (-110 pps) turned out to be largely in relation to the impulse from 1.1929 to 1.1892 (-37 pps). This means there is a strong likelihood that the pair will retrace to 1.1971. If the price rises above 1.1932, those who sold on the breakout of yesterday's low will close their positions either through stops or by tracking the market. This would strengthen the recovery of EURUSD pair along the trend line. In line with our forecast, we expect to see the euro enter reversal territory and correct down to the balance line. 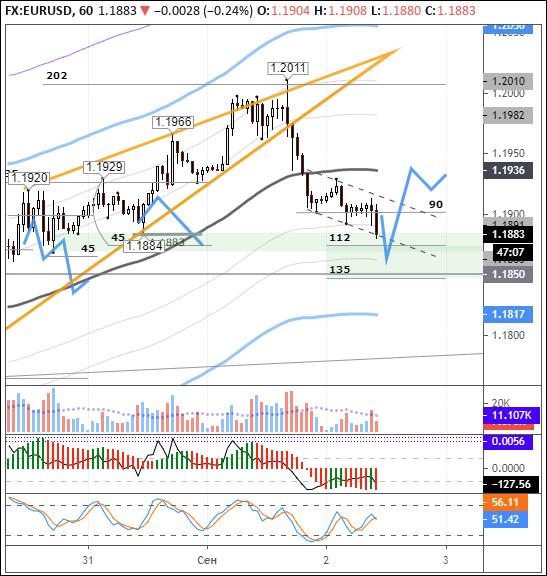