Ahead of next week’s ECB meeting, central bank officials have become irritated over the strengthening of the single currency. ECB’s chief economist Philip Lane said that the strong euro will impact policymakers’ economic growth forecast for the region as well as monetary policy decisions. The regulator is concerned about the appreciation of the euro amid weak demand.

And while no specific mention was made about which decisions might be affected by the surging euro, these remarks were sufficient to prompt buyers to close long positions on the single European currency.

The euro’s decline halted in reversal territory at 112-135 degrees of the Gann angle, but four hours were not enough for buyers to muster upward movement to the balance line. Pressure on the euro intensified during the North American session.

To remind, the US nonfarm payrolls report is due out on Friday. After a two-day pullback, the focus of attention may shift to this data point, which could allow the pair to correct to 1.1832-1.1845.

On the hourly timeframe, a bullish divergence has formed between the AO indicator and the price. Players should now wait for confirmation by way of a change in color of the indicator column. If Europe does not take its cue from Asia, we may see a nice upward correction.

As regards the Euro index on the daily timeframe, the technical picture appears to have taken a bearish turn. Should the decline in the index gain momentum, the EURUSD pair could plunge to 1.1700.

Among today’s highlights, investors are advised to watch for the services sector PMI stateside. As for the ADP index, the reading turned out worse than expected, putting pressure on the greenback. 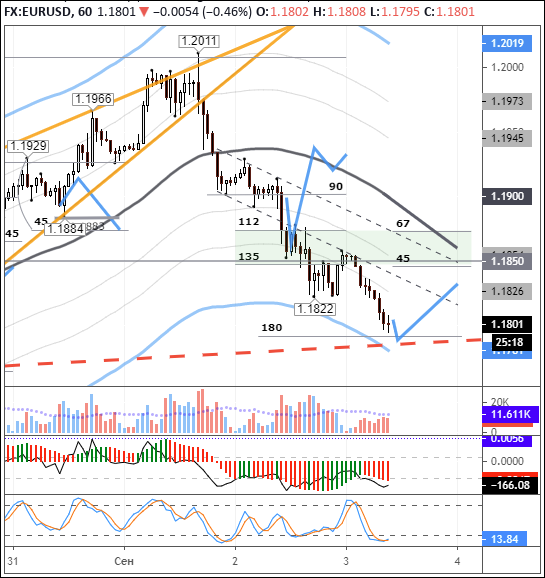