The euro rose 0.10% to 1.1815 against the US dollar on Thursday, August 10. After yesterday’s policy meeting, the European regulator decided to leave all rates unchanged. EURUSD shot up to 1.1918 amid remarks by ECB President Christine Lagarde that the bank believes there is no need to overreact to the euro's rally. And while the ECB remains committed to monitoring the exchange rate pass-through, it is not a monetary policy instrument.

From 1.1918 the price action quickly retraced to the balance line at 1.1810 (-108 points). The US dollar drew support from a pullback in equities and a slide in cable due to hard Brexit fears.

The pound sterling took a hit across the board. It was heavily impacted by warnings from Brussels and a rally in EURGBP against the backdrop of Christine Lagarde's speech. The British currency plunged 2% to 1.2729 against the dollar, and 1.64%, to 0.9225 against the euro.

The European Commission said that if Britain passes the proposed domestic legislation overriding parts of the Withdrawal Agreement it would constitute a serious breach of the Brexit treaty and international law.

Major currencies are on an upward trajectory in Asian trading. A long upper shadow has formed on the daily candle. It will be quite challenging for buyers to muster a rally on the last trading day of the week.

The 45th degree of the Gann angle passes through 1.1864 and acts as a resistance level. It also roughly coincides with 50% of the decline from 1.1918 to 1.1810. In line with our forecast, we expect the pair to recover to the above-mentioned level. We do not expect to see a rally or even an end to the decline, although such a scenario looks quite plausible in light of positive equity market sentiment and a weakening of the dollar against major currencies.

Buyers are worried about the EURGBP cross pair. There is a risk that a correction could set in ahead of the weekend and then the euro bulls with the dollar would not be able to withstand aggressive euro selling. 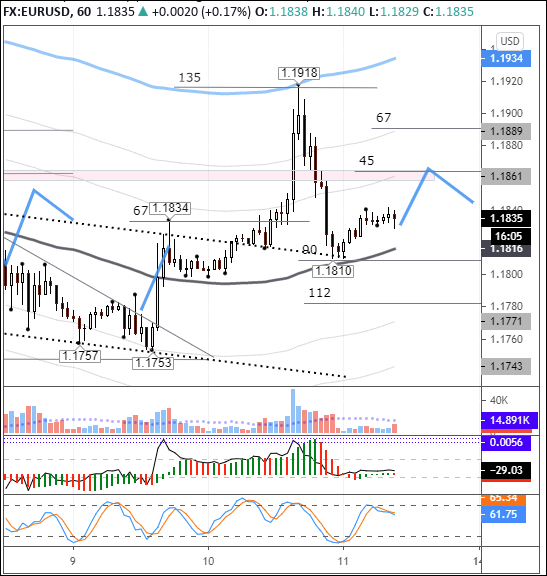