EURUSD: buyers aim to hold above 1.16

By the close, the euro weakened 0.24% against the US dollar to 1.1645. Before the European opening, the euro was locked in a side trend. The common currency sank due to the ECB’s soft tone. On Thursday, the regulator made it clear that it is ready to extend easing measures at its December meeting.

Macro data out of Germany and the Eurozone gave the market a boost and bolstered buying as the Q3 recovery came in stronger than expected. The euro gained 0.17% during the North American session. The market has calmed down after new lockdown measures imposed in France and Germany. Ahead of the weekend, there was a correction as players closed short positions. Euro gains stalled only due to a retracement to the 45 degree-line. EURGBP cross dynamics did not allow buyers to muster the strongest possible upside push. After the European close, the euro fell back to its earlier low amid a decline in all crosses (EURGBP, EURJPY, and EURCHF). Within a few hours, the price action 59 points to 1.1640. 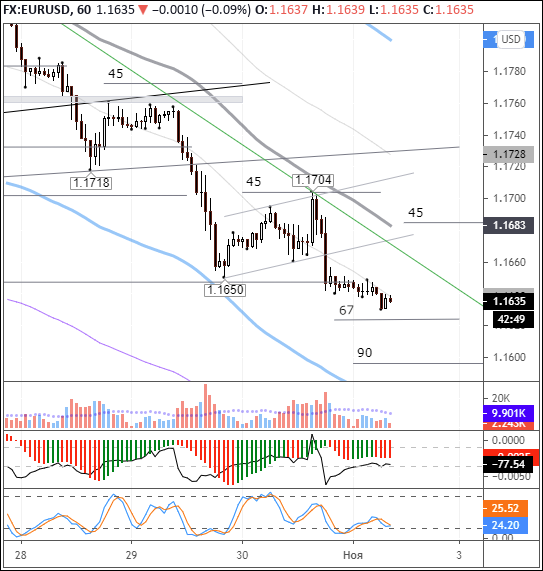 On Monday, November 2, major currencies opened lower against the US dollar in Asian trading. Cable opened a downward gap, while Brent crude fell 3% to $36.69/bbl. The euro dropped 1.1630.

UK PM Boris Johnson on Saturday night announced the introduction of new lockdown measures in England from November 5 to December 2, amid escalation of Covid-19 cases. The UK will see a nationwide closure of pubs, restaurants, shops, with the exception of those that sell essential items, while a ban will be imposed on meetings of people living separately. At the same time, schools, universities and some government institutions in England will remain open.

More sharp market swings can be expected ahead of the US presidential election. The exit polls should come out on November 4 at about 5:00 GMT. Trump warned that mail-in voting could drag out the results for a long time. Biden is still ahead in the latest polls. A new president would mean heightened market volatility.

Given the tense situation surrounding the pandemic and the introduction of lockdowns until December, the euro runs the risk of further losses. On the daily TF, the price action is picking up momentum. Sellers are targeting the 1.1540 level. As for the key news, we would like to highlight European manufacturing PMI indices for Europe, as well as the ISM manufacturing index stateside. All eyes are now riveted on the US elections, so the market might not react to today’s macro releases.

Unless the lockdown frightens US players the price action could adjust to 1.1660 by the close.