As a result, the single currency strengthened 0.44% against the greenback to 1.1873. Brisk buying was seen prior to the European opening, although all currencies showed mixed performance. Conversely, the yen, the loonie, cable, and the aussie were stuck in the red.

The EURUSD pair rose to 1.1890 due to crosses, brushing aside record daily numbers of Covid-19 cases alongside sluggish macro data out of Germany. Friday’s robust US non-farm payrolls report for October also gave buyers a boost.

The jobs report had no impact on the dollar, as was the case with the previously announced monetary policy decisions of the central banks of the UK and the US.  According to the growing consensus, employment growth in November could slow down sharply or even decline due to the second wave of the pandemic.

Ahead of the weekend, the presidential race was still too close to call. Trump was trailing in electoral college votes. For this reason, his legal team decided to challenge the voting results in several states.

EURUSD held its positions at 30 pips from 1.1900 near the upper MA line – a channel with a 1% deviation from the midline with a period of 55 days. 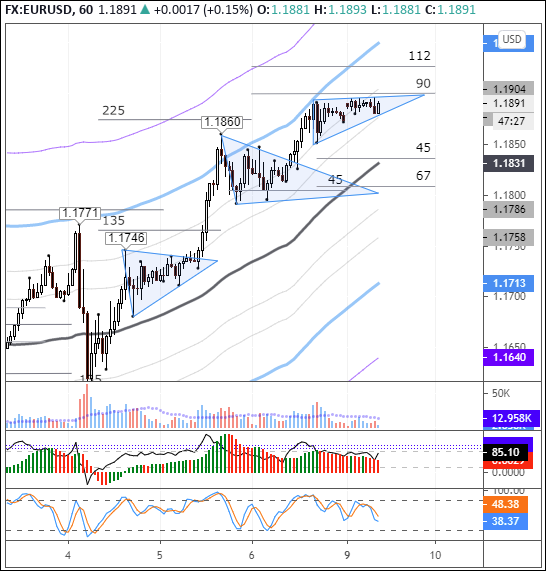 The market experienced a groundswell of optimism in Asian and European trading on Monday morning as Joe Biden on Saturday captured 290 electoral votes, opening the way for him to become the 46th President of the United States. Congratulations flowed in from Biden’s associates and leaders of foreign countries. Russia is in no hurry to acknowledge his victory, nor is the incumbent US President Donald Trump, who has refused to concede defeat. Trump has filed lawsuits in a number of courts due to alleged vote counting irregularities in some states. Therefore, it makes sense to wait for the official results to come out pending an investigation. December 8 is the deadline by which the states must approve the election results and finalize the electoral college count.

At the time of writing, the euro was trading at 1.1891. On the daily timeframe, buyers broke out of a key resistance level, paving the way towards 1.1960. The bullish trend is gaining strength, while bearish divergence has shaped up on the hourly timeframe. After a rally in the range of 1.1612-1.1927, there is a risk of a correction to 1.1850. Players are advised to reduce trading risks in new short positions placed against the trend as long as bullish sentiment prevails on the US market in the wake of the US election. Meanwhile, the trend towards euro depreciation is gaining traction on the monthly and 3-month timeframes.