The EURUSD pair traded lower on Monday, November 9, with the euro falling 0.51% to 1.1813 by the close. The price action shot up to 1.1920 during the European session on news about Pfizer’s vaccine breakthrough.

Research on the Pfizer vaccine has shown an efficacy rate above 90% in treating coronavirus infections. No serious safety issues were observed during the primary endpoint. This encouraging news triggered a rally in equities and a decline in the dollar.

Buyers were unable to keep up the momentum. After retracing to a recent high, the single currency pulled back to 1.1795. Market participants began to take profit as the head of the relevant department - the US General Services Administration - Emily Murphy, the Trump appointee who runs the agency, refuses to comply with formalities and recognize Joe Biden as the winner of the presidential election and president-elect.

The euro’s fall was sharper than that of other currencies for another reason. The EU will begin imposing tariffs on US imports worth $4 bln on November 10. This is an old saga, so the negative news flow was attributable to several factors. 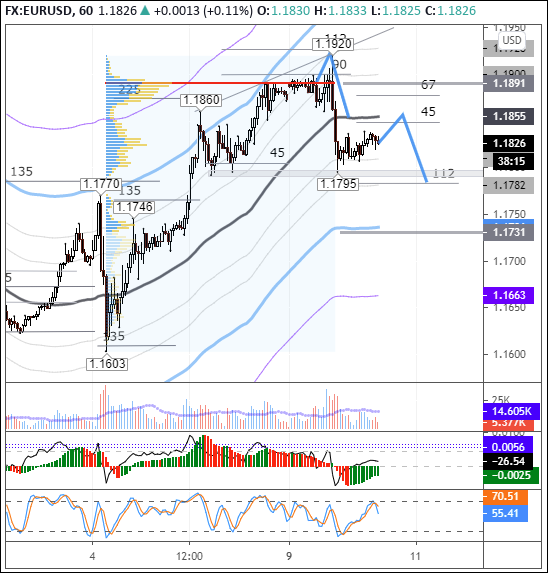 The pullback stalled near 1.18 below the balance line. The price recovered from 1.1795 to 1.1838. At the time of writing, the euro was trading at 1.1826. The single currency has been in consolidation mode for 15 hours. Given the euro’s weakness against the pound, there is a risk of a retracement to recent lows by the end of the day. Looking to indicators and wave proportions, a retracement to 1.1860 might not be so bad as the key pair takes a breather before resuming its ascent. Meanwhile, the volume profile could roll back to 1.1731.

Investors are getting nervous about the election outcome. They fear Trump will be able to have the vote recounted in court. The incumbent president also dismissed Mark T. Esper, the country's defense minister, and appointed Christopher C. Miller, director of the US National Counterterrorism Center, as interim defense secretary. These moves would strengthen Trump’s hand and help him prepare for armed protests.

We should not expect the dollar to weaken until the situation clears up. S&P 500 index futures lost on Monday whatever profit it had gained on the vaccine news. Technically speaking, Joe Biden is the President Elect, but officially he is still in limbo.