EURUSD: poised for another pullback

The EURUSD pair was little changed on Thursday, November 26. Buyers retreated to 1.1885 after an unsuccessful attempt to gain a foothold above 1.1950. As the key pair sank into decline, technical factors were more at work than fundamentals. Market participants in recent days have completely brushed aside the exponential rise of Covid-19 cases in Europe. Notably, yesterday a number of ECB monetary policy speeches flagged weak economic growth in Q4.

Meanwhile, the pound sterling dropped from 1.3397 to 1.3322. Sterling came under pressure from uncertainty over the outcome of Brexit talks. And while a successful deal has been partially priced in, fears remain that the talks could still break down. Market players expect politicians to provide clarity on this issue before the EU summit on December 10-11.

The US market was offline yesterday in observance of the Thanksgiving holiday. After dropping to lows of 1.1885 and 1.3322, the euro and the pound have pared roughly 50% of the losses incurred in European trading. The upward trend continued during Asian trading on Friday morning. 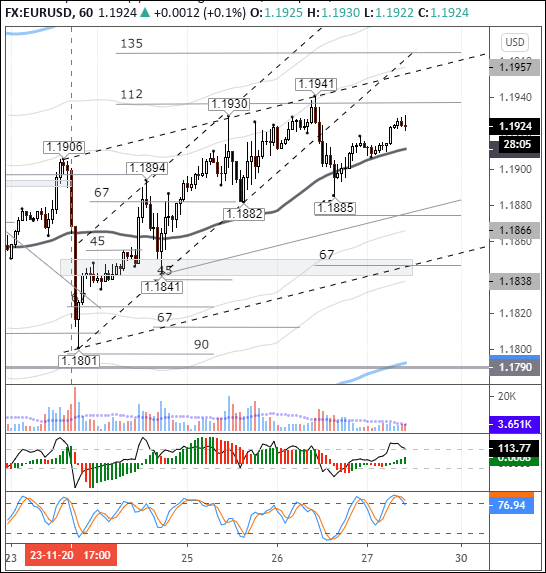 At the time of writing, EURUSD was trading at 1.1925, near the balance line. Buyers pushed up the single currency from 1.1885 to 1.1929, taking advantage of thin volumes due to the long weekend stateside.

Today will be a shortened trading session in the US and the macro agenda is blank. For this reason, EURUSD may continue to move sideways in the range of 1.1880-1.1940 until the end of the week.

Major currencies have been trading in positive territory. Topping the leaderboard are the kiwi and the aussie. There is heightened demand for risk assets, but technical analysis does not support an extension of the upward movement. From its 1.1885 low, the euro strengthened against the dollar through a three-wave structure. There was a 76.4% correction in relation to yesterday's decline. The price is at the Fibo level and has been on the rise for 18 hours. Hourly charts (Stochastic, CCI) show top-down movement. The decline may pick up momentum when London opens.