The EURUSD notched up robust gains on Tuesday, December 1, with the single currency gaining 1.21% to 1.2067 against the dollar. The price action started to head north during Asian trading after China released a stellar Caixin manufacturing PMI and the RBA decided to hold monetary policy steady. During the European session, sellers tried to resume the downward movement, but encountered euro buying during the North American session.

The dollar came under pressure for the following reasons:

1. An 80-pip rally to 1.3441 in the pound sterling. Tom Newton Dunn of Times Radio said the UK and the EU could strike a post-Brexit trading deal by the end of the week.

3. The ISM manufacturing index fell to 57.5 in November, down from 59.3 in October (vs. the 58 forecast). Moreover, the employment component fell to 48.4 compared to the previous 53.2. These figures are food for thought as the official US labor market report (non-farm payrolls) will be released on Friday.

4. Fed Chairman Jerome Powell said that the Fed will not hike rates until inflation stays meaningfully above the 2% target for a period of time.

Traders focused on any news bolstering risk appetite, while brushing aside EU difficulties and the lack of headway in Brexit talks (there are only promises that we have been hearing for four years).

ECB President Christine Lagarde said the latest figures show the economy is still suffering. The regulator will adjust some instruments to support the economy so that it recovers at a faster clip after the pandemic. 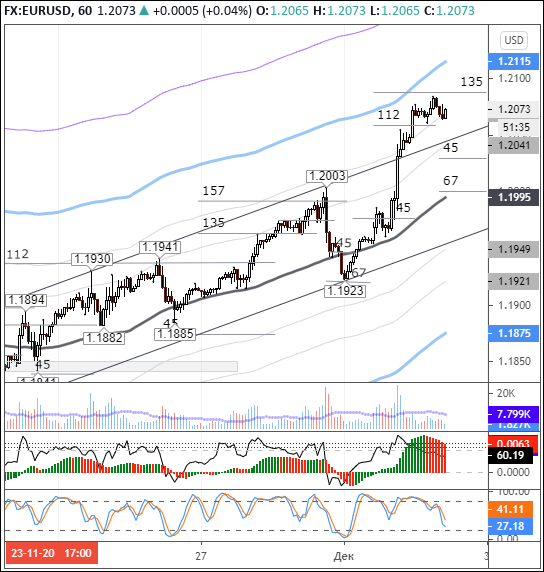 The euro bulls snuffed out the November 30 candlestick reversal pattern over a string of dollar-unfriendly news. The euro rose to 1.2084 amid heighted demand for risk assets. Growth slowed down in the area between Gann 112 and 135 degrees near the U3 line (55-day MA and 1% deviation).

EURUSD continued to trend higher yesterday after macro data was released in Australia. Q3 GDP came in at 3.3% vs. the 2.5% forecast. The reading decreased 3.8% YoY compared to -4.5% projected.

As regards major currencies, the Canadian dollar, the franc and the yen are trading in the red. The loonie is on the back foot after a decline in oil prices ahead of the OPEC decision. OPEC countries have still not agreed to extend the production cut agreement for 2021.

Even though the price action is hovering in the range of 112-135 degrees, buyers are tapping into strong support from their allies as traders buy into all euro crosses. All euro crosses are trading in positive territory, playing into the hands of euro buyers and keeping the price around 1.2060.

As regards today’s key macro news, we note the ADP November employment report. Players should focus on this data point ahead of US non-farm payrolls due out on December 4.

The U3 MA line is at 1.2115. Looking at the 4-hour and daily timeframes of the NZDUSD pair, the euro could also move upward in a sawtooth pattern below the U3 line. In order for buyers’ intentions to be upended, the euro would have to be pushed down to 1.1925. Right now, the market is agog with excitement from potential Brexit and vaccine news. Market participants are turning a blind eye to many issues. As long as euro crosses remain in demand, all pullbacks will be recouped. There is no bearish divergence between the price action and the AO indicator. For this reason, we think the odds are high that the key pair will retrace further to multi-year highs. Three support levels will be at work along the trendline: 1.2047, 1.2030 and 1.2000.