The EURUSD pair logged more solid gains on Wednesday, December 2, up 0.38% against the dollar to close at 1.2113. Upward momentum in the European currency was stoked by Brexit news and a rally in EURGBP. Upside intensified after the release of the ADP private employment report stateside.

After dropping to 1.2040, the price action reversed upward and tested the 1.2100 level by the close. Meanwhile, EURGBP jumped 93 pips to 0.9084 amid Brexit news. This was a big move for a cross currency.

The EU’s chief Brexit negotiator Michel Barnier was quoted as saying that “a deal still hangs in the balance”. That was enough to crash the pound. Given that the reaction to news is always the same, it can be assumed that sharp fluctuations are caused by FX trading robots (bots) that are geared towards volatility. Thus, if volatility rises by X% in X seconds, the bots start buying/selling in the direction of the incipient momentum. Then at a certain point, they exit (close) positions so as not to incur losses when the correction sets in. 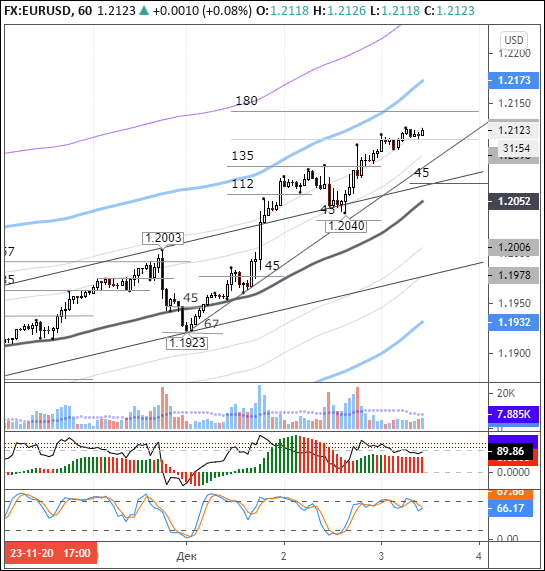 Brexit negotiators are keeping traders on pins and needles with their uncertainty. Nobody knows what news will roll in. What’s more, France reminded Barnier of the risk of a veto should he yield to the UK’s demands in the post-Brexit trade talks.

At the time of writing, the euro was trading at 1.2119, with cable topping the leaderboard, having pared 76% of yesterday's losses and the price action is currently retracing to the upper line of the 1.3400-1.3452 range. It is recovering quickly on the back of a weaker EURGBP cross.

On the hourly TF, the EURGBP cross bounced off U3 and is now correcting lower after yesterday's rally. If the trend picks up momentum, the price could resume its ascent from 0.9040 and in a sawtooth pattern to 0.9120. Euro cross buying can be seen, except for the EURCHF and EURGBP pairs. For this reason, the euro bulls will have to try harder if the 1.2150 level is to be tested.

Support currently stands at 1.2095 (the trendline from 1.1923). Below is the 45-degree line (1.2070). From the technical standpoint, the pair looks ripe for a correction, but right now the market is being driven predominantly by geopolitical factors. The crowd will apparently buy/sell into whichever headlines are fed into FX newsreels. And while players would be better off entering the market on the basis of technical analysis, there is no guarantee that a signal will turn into profit given the likelihood of unexpected news.

Parenthetically, we also note that on the daily and weekly timeframes, buyers have set their sights on the 1.2270 target level. On the three-month chart, the target is 1.28. If the current upward trend has legs, the price could hit this mark by mid-June 2021.