The EURUSD pair closed to the downside on Friday, December 4, with the European currency dipping 0.15% to 1.2121 on the day. The price began to trend lower after the European opening and gained momentum following the release of US labor market report.

The payrolls report showed that the US economy added 245,000 non-farm jobs in November, far below 610,000 in October. This was the smallest gain since the job recovery process got under way back in May. In September, the figure was upwardly revised from 672,000 to 711000, and the change in October was downwardly revised by 28,000, from 638,000 to 610,000.  Based on these numbers, employment in September and October combined totaled 11,000 more than previously reported. At the same time, unemployment fell and the average hourly wage rose. The euro bulls attempted to regain the initiative, but after a week-long rally, buying apparently fizzled out and the bulls opted to retreat to 1.2110 ahead of the weekend. 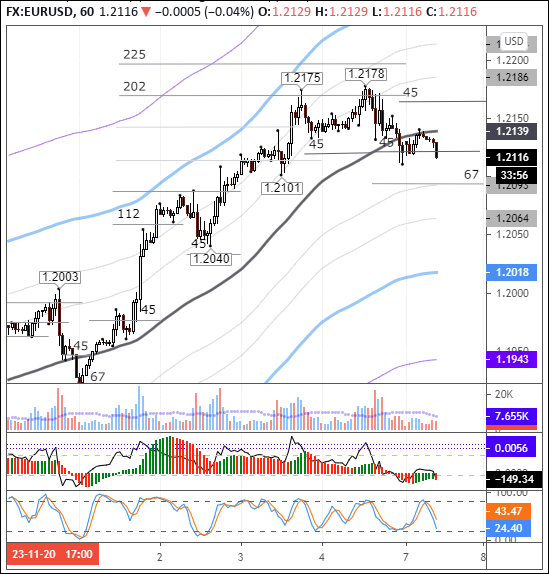 FX trading opened on Monday, with all major currencies recording mild gains. As negotiators failed to make any progress in Brexit talks over the weekend, the British pound swiftly retraced into the red, dragging along all other major currencies with it. The aussie and the loonie both opened in negative territory.

Over the past week, buyers pushed the key pair 1.65% higher. At the time of writing, the euro was changing hands at 1.2118. Even though all euro crosses are trading in positive territory, EURUSD is lagging behind GBPUSD. The double top pattern was confirmed as sellers held their ground below 1.2135. So, a step down to 1.2095 looks doable at this point for the bears.

No key macro releases are scheduled for today. All eyes are still riveted on Brexit and US election news. t at this point, he situation is heating up stateside. In our view, the odds are high that Donald Trump could impose martial law by the end of the week in the run-up to certification of the electoral college vote.