The EURUSD pair was little changed on Tuesday, December 8, with the euro dipping 0.04% against the greenback to 1.2101. The pair was rangebound at 1.2095-1.2134. The euro tapped support from the EURGBP cross on the back of Brexit news ahead of the North American session.

Meanwhile, Brexit talks are going nowhere fast. With just three weeks to go before the deadline, negotiators were unable to settle differences over a post-Brexit trade deal. During European trading, the pound sterling slipped to 1.3290, from which the price action swung sharply higher to 1.3393.

The two sides reached an agreement on the status of Northern Ireland that avoids the need for a hard border between the UE and the UK, while the UK government agreed to remove three clauses in breach of international law from its Internal Market Bill.

EURUSD growth stalled due to a decline in the EURGBP cross pair, while cable failed to resume growth. Then after sharp fluctuations, the market reverted to a correction. 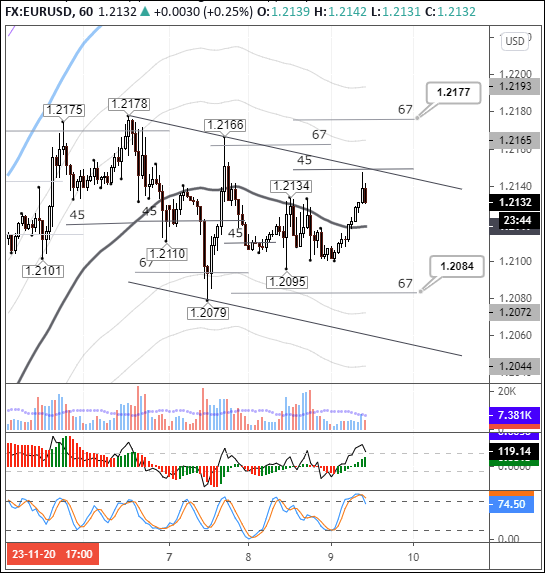 Major currencies are showing green on the screen in Asian trading. Topping the leaderboard are the aussie ( 0.56%) and the kiwi ( 0.42%). Their appreciation against the US dollar implies the onset of risk appetite.

The EURUSD pair rose to 1.2147 in Asian trading. Growth decelerated near the trendline and the 45-degree line. If London does not support Asia’s uptrend, the price action will retrace to the 1.217 level, where it can be expected to hover until the North American session gets underway.

Given that most crosses are trading in positive territory, 1.2177 at the 67-degree line can be regarded as today’s target. Brexit remains the main wildcard this week. That said, it would be hard to imagine what other surprise the UK and the EU might have in store.