The EURUSD pair opened to the downside on Monday, December 21. The dollar moved higher across the FX market on news from the UK. The rapid spread of a new coronavirus strain in the UK combined with a hard lockdown in Southeast England prompted investors to seek refuge in the dollar. During the European session, EURUSD fell back to 1.2130, while GBPUSD slipped to 1.3188. By the end of the session, the single currency pared all losses and closed the morning gap. In the upshot, the euro recovered to 1.2253 ( 123 pips).

Why did the market turn around?

First of all, after the pullback, an upward correction to 1.2130 got underway. The dollar's decline gained traction during the North American session, as US equity benchmarks recovered from their decline. Risk assets drew additional support from the UK, which said it was ready to make concessions.

Investors were concerned during early trading about the new coronavirus strain, but apparently later they recalled that thousands of articles had been published on the topic of mutations over the past six months. Back then, however, the market showed little or no reaction to that issue. Virologists say that there are over a hundred variants of the coronavirus currently in circulation, and they differ little from each other. The vaccines that have been developed should protect the body against the new coronavirus strain.

British Prime Minister Boris Johnson has made a new proposal on fisheries. The proposal calls for a one-third reduction in the value of the fish caught in UK waters, provided the EU makes counter-concessions.

By evening, market participants recollected that Congress had signed an agreement on Sunday to combat the pandemic after months of bipartisan wrangling. 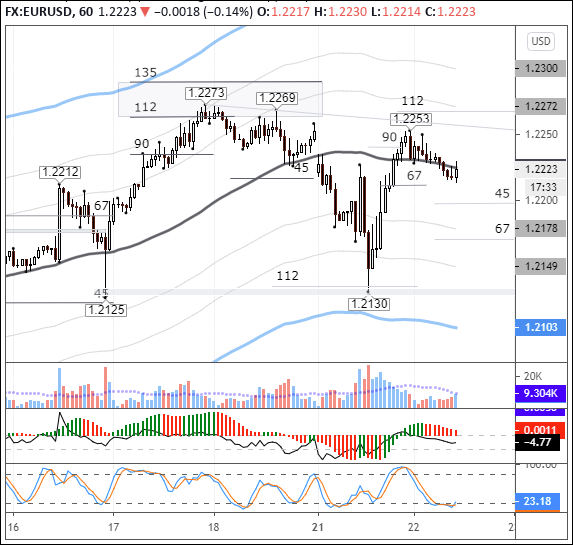 Major currencies are tending lower in European trading. Topping the losers board are the New Zealand and Australian dollars. The FX market is recovering after yesterday's gyrations.

After reaching a high of 1.2253, the euro dipped to 1.2214. On the daily TF, a candlestick pattern with a long lower shadow and a bullish body shaped up yesterday. Buyers managed to neutralize the bearish sentiment, but it remains to be seen whether they can defend the 1.2200 level in the run-up to Christmas.

Meanwhile, euro crosses have been showing mixed dynamics. Uncertainty prevails on the market due to the constantly shifting news flow. It is not known whether the EU will make concessions or not. Ahead of Christmas, trading volumes are thinning out, while volatility is on the rise.

As for today’s outlook, given the daily candle, we see a chance for a decline to the 45-degree angle line (1.2197) with a subsequent step up to 1.2253. If growth starts from the 1.2223 level, then the target will be 112 degrees (1.2270). No key macro releases are expected ahead of Christmas, so Brexit and coronavirus news will continue to exert a strong impact on the markets.