EURUSD: buyers attempt to break out of 1.1970 resistance

EURUSD dipped 0.11%, to 1.1965 on Thursday, April 15, off an intraday high of 1.1993. Buyers lacked the resolve to test 1.20 and were forced to retreat. They made a second attempt during the North American session amid a weakening dollar as an upbeat macro news flow pushed the price action up to 1.1984.

The US dollar tumbled in response to a decline in the 10-year Treasury yield to 1.529%. The pullback on the fixed income market was also driven by stellar retail sales and labor market data stateside.

Retail sales zoomed up 9.8% in March, smashing past the median consensus that called for 5.9%. Initial weekly jobless claims plunged to 576k for the week ended April 10, compared with 769k in the prior week (vs. 700k expected). 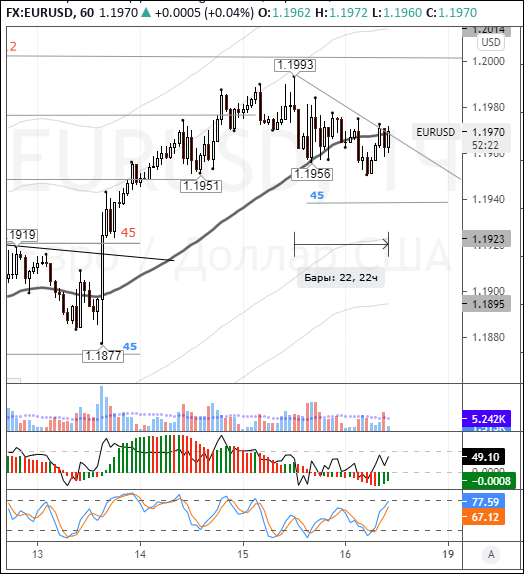 The euro was hovering around 1.1969 at the time of writing. The price action has been moving within a corrective phase for the past 22 hours. Since in Asian trading the rate dropped to 1.1950 and recovered to 1.1972, we expect the pair to extend gains to 1.1985. Virtually all euro cross pairs look buy-friendly, except for EURCHF and EURCAD. A pickup in the key pair could stoke upside in 10-year UST yields (1.583%). Upside prerequisites are looking pretty good. That said, if sentiment shifts abruptly ahead of the weekend, sellers will look to 1.1938 (45-degree angle) as their first target.