The EURUSD pair ticked up 0.09% to 1.2078 on Thursday, May 13. The price action moved in the range of 1.2051-1.2106 during the day. US macro data releases were unable to push the price out of that range even though the 10-year Treasury yield narrowed to 1.649%. Selling in the dollar got underway right after Asian trading opened this morning.

Fed Vice Chairman Richard Clarida said Wednesday that weak jobs growth and strong inflation in April has not dented the central bank's plan to keep its support for the economy wide open. Other FOMC members followed up by echoing these comments. 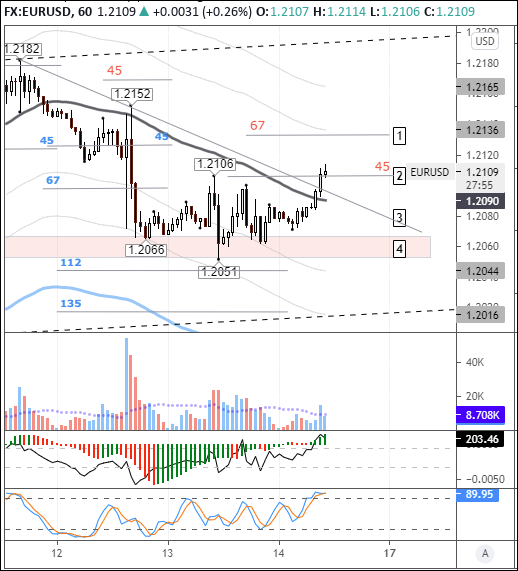 Major currencies have been trading in positive territory against the greenback, with the leader board topped by the franc and the euro. By the time of writing, the single currency fetched $1.2107. From a low of 1.2051, the price action recovered to the 45-degree angle (2). Buyers breached the trendline quite easily (3), while the support level (4) remains intact. The path to 1.2133 (1) is open for buyers.

As for the key news, we note the ECB's report on its monetary policy meeting. If the regulator drops any hints about dialing back its bond purchase programs, this will exert a negative impact on the EURUSD pair. Take careful note of the release time for that report in order to avoid entering the market before it comes out.

Given that all crosses are on the buy side, one eye should be kept on the 1.2190 mark.

Bottom line: the single currency has been trending higher since early morning trading. Buyers have pared all of Thursday’s losses and today, after retracing to a high of 1.2106, look set to extend gains up to 1.2133. In light of the uptrend in main euro crosses (EURGBP, EURJPY, and EURCHF) and a correction in the dollar, we expect the single currency to appreciate against the dollar to 1.2190.