EURUSD has been slammed by reduced bets surrounding the European Central Bank’s intended rate hikes, amid a souring economic outlook for the Eurozone.

The world’s most-traded currency pair sank below 1.03 for the first time since December 2002, and is still languishing around that two-decade low at the time of writing. 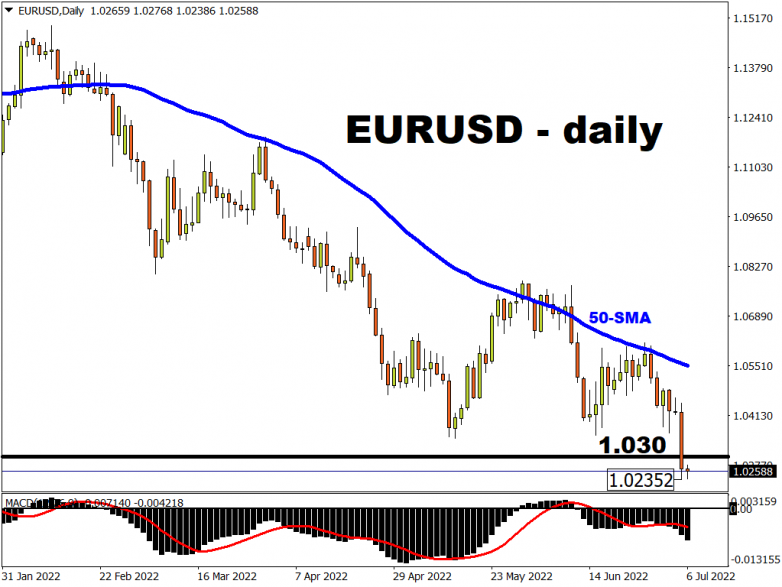 When could EURUSD hit parity?

Markets currently point to a greater-than-even chance (57.2% to be more precise) that EURUSD could touch the 1.000 mark sometime in Q3.

Those odds climb higher to a 66% chance of EURUSD reaching parity sometime over the next six months.

And markets believe this downtrend is set to continue for longer: 25-delta risk reversals are at the most bearish positioning since March on EURUSD’s 3- and 6-month outlooks.

Recall that back in March 2022, the Fed triggered its first rate hike since 2018, while the ECB still lags behind – slated to only raise rates two weeks from now at its policy meeting on July 21st. That widening policy gap, which was already evident in the markets since Q1, sent EURUSD tumbling by over 3% in the first week of March.

Why is the euro sinking?

Markets are growing increasingly pessimistic about the Eurozone’s economic outlook.

With investors and traders only all too aware of these downside risks for the Eurozone economy, no surprise then of the euro’s weakness, with its downtrend against the US dollar set to persist for the rest of 2022 at least.