EUR/JPY takes another shot at retaking 123.00

© Dukascopy Bank SA
"The introduction of a negative interest rate caused a warning light to flash for the sustainability of QQE [qualitative, quantitative easing], and further quantitative expansion would probably shorten the policy's lifespan."
- BAML (based on CNBC)

Pair's Outlook
The Euro remained relatively unchanged against the Japanese currency on Tuesday, failing to fall back towards the 122.00 major level. Technical indicators keep giving mixed signals in the daily timeframe, but remain bearish in the longer timeframes, thus, the overall outlook also remains bearish. The EUR/JPY cross could take another shot at slumping under the 122.00 psychological level, but with the nearest support still being out of reach around 121.25, represented by the Bollinger band. However, the pair is also eventually expected to reconfirm the 18-month down-trend, therefore, there is room for a bullish development towards the immediate resistance around 123.60.

Traders' Sentiment
Today 68% of all open positions are long (previously 72%), while the number of purchase orders inched up from 49 to 53%. 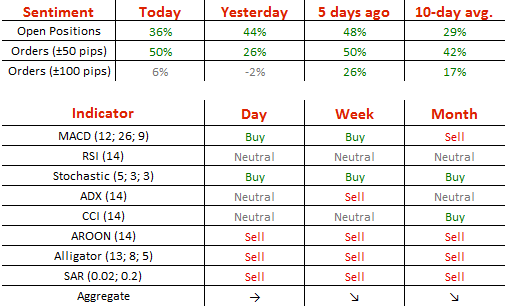