© Dukascopy Bank SA
"During the past year, markets have been wrong-footed by the communication a number of times, usually resulting in a higher New Zealand dollar. Knowing that, the market doesn't want to be short."
- Westpac Banking Corp. (based on Bloomberg)
Pair's Outlook
Considering the latest developments, a combination of the 55-day SMA and monthly PP at 0.6830 is unlikely to stay intact. Since there will be no significant obstacles then, the currency pair will have a good opportunity of revisiting the April and May highs at 0.7055 shortly thereafter. However, further rally is not expected, being that there is the upper bound of the bullish channel at 71 cents. Meanwhile, from below the New Zealand Dollar is supported by 0.6744/31, namely the 100-day SMA and the 23.6% Fibonacci retracement of the 2014-2015 down-move.

Traders' Sentiment
SWFX sentiment towards the Kiwi has become strongly negative, as the portion of short positions open in the market jumped from 59 to 70%, while the portion of sell orders shot up from 44 to 62%. 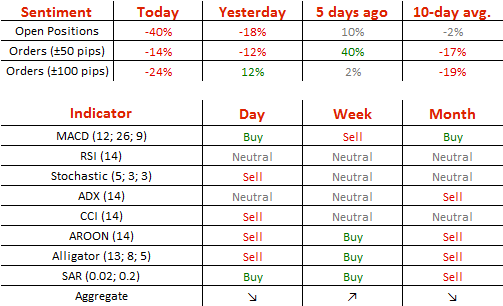