© Dukascopy Bank SA
"What we've found is jawboning is coming from officials when the dollar comes closer to ¥105."
- A senior dealer at a Japanese bank (based on Market Watch)

Pair's Outlook
Friday was an extremely unfortunate day for the USD/JPY, being that the pair dropped more than 200 pips, reaching the lowest level in five weeks. Technical indicators now imply that the bullish momentum is likely to prevail, which would mean a breach of the 38.20% Fibonacci retracement level, located at 106.65. In this case the second target will be the cluster circa 107.10, represented by the Monthly S1 and the Bollinger band. Nevertheless, the US Dollar has the potential to reach even the 107.60 level, but the base case scenario is still a close under the 107.00 mark.

Traders' Sentiment
A rather large portion of bulls remains dominant in the market, namely 74% (previously 75%). Meanwhile, the number of orders to acquire the Greenback edged up from 63 to 73%. 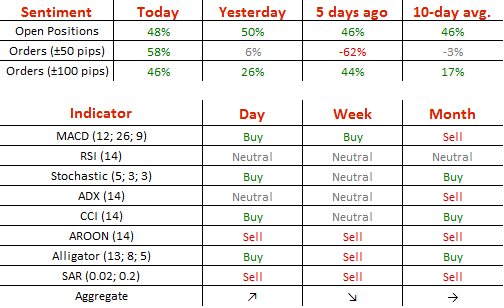