GBP/USD attempts to regain some value

© Dukascopy BanK SA
"It (Brexit risk) is becoming a much broader issue than just sterling weakness. What we're seeing is the still-rising UK exit risk playing out more in a global risk-off move."
- RBC Capital Markets (based on Business Recorder)

Pair's Outlook
Yesterday weak UK CPI data, as well as the concerns over the upcoming EU referendum, caused the GBP/USD currency pair to close with a 155-pip loss. The second support cluster, namely the monthly S2 and the weekly S1 just under the 1.42 major level, succeeded in limiting the losses. Demand at that area appears to be strong enough to even trigger a rebound today; technical indicators are somewhat bolstering that possibility, as they are no longer giving bearish signals in the daily timeframe. In case of a rally the closest resistance in face of the Bollinger band is likely to be pierced, opening the door to the price of 1.42 dollars.

Traders' Sentiment
Bulls grew in number over the day, as 65% of all open positions are now long. Meanwhile, there are 57% of orders to purchase the Sterling. 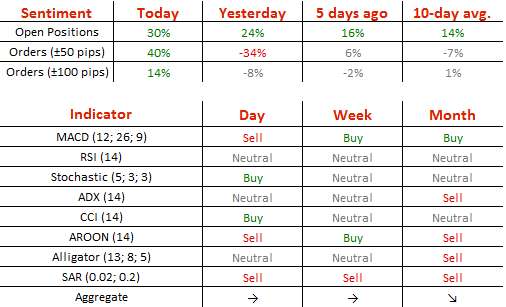