© Dukascopy Bank SA
"The undertone is still positive as long as the immediate support at 0.7420/25 is intact but any up-move from here is unlikely to have enough momentum to move clearly above 0.7505. A drop below 0.7420/25 would indicate the start of a consolidation phase."
- UOB Group (based on FXStreet)

Pair's Outlook
As was expected, the Australian Dollar strengthened against the US counterpart on Monday, without trade closing below the 0.7470 mark. However, the exchange rate climbed over the 55-day SMA yesterday, therefore, more bullish momentum is likely to follow, despite the weekly R1 providing immediate resistance at 0.7468. The second resistance area lies only circa 0.7540, namely the weekly R2 and the Bollinger band. Nevertheless, the 0.75 psychological level could act as an interim resistance and also put the intraday increase to a hold. Technical indicators are also in favour of a rally, but we should not rule out the possibility of a slump back to the 100-day SMA around 0.7412.

Traders' Sentiment
Bulls gained some numbers, as 74% of all open positions are now long (previously 73%). The number of buy orders edged up from 53 to 69%. 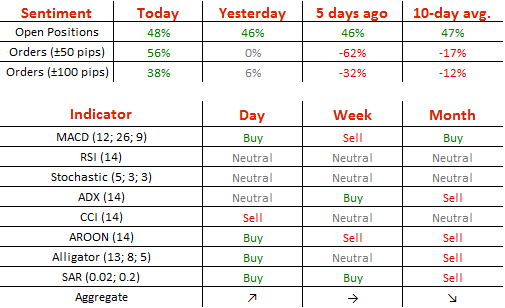