© Dukascopy Bank SA
"The euro was trimming today's losses and was trading flattish around $1.1070 during the London session, having printed daily lows at $1.1040 during the Asian session.
- based on WBP Online

Pair's Outlook
The common European currency remains unchanged against the US Dollar on Thursday, as it was at 1.1099 by 5:00 GMT. The currency exchange rate fell on Tuesday, and it recouped some of its losses on Wednesday. As the pair surged on Wednesday, it went past the resistance provided by the 200-day SMA and weekly PP at 1.1092. In the meantime, daily aggregate technical indicators forecast that the EUR/USD pair will trade lower by the end of the day's trading.

Traders' Sentiment
SWFX trader sentiment has remain unchanged over the past 24 hours, as 52% of open positions are long. In the meantime, pending orders in the 100-pip range are 63% short, as traders generally expect a fall of the pair. 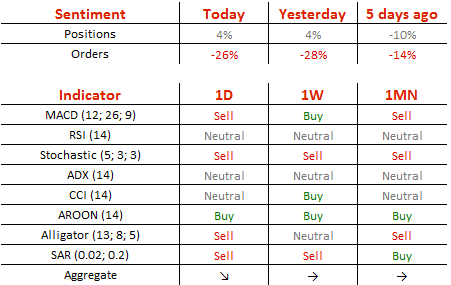