As much as renewable energy is becoming increasingly popular, the world still runs on oil and natural gas. Therefore, it is hardly a surprise that the largest initial public offering (IPO) in history belongs to Saudi Aramco, the world’s largest integrated oil and gas company and the largest investor-owned oil company. Sporting a market cap of around $2 trillion, this Gulf mammoth dwarfs the likes of Apple, Microsoft and its Western rivals in the energy field, Shell and Exxon Mobil.

Go to Aramco on eToro

75% of retail investor accounts lose money when trading CFDs with this provider. You should consider whether you can afford to take the high risk of losing your money.

After years of being exclusively owned by the Saudi Government, Aramco is now open to the public, offering up shares worth tens of billions of dollars. Until recently, the record for the largest-ever IPO was held by Alibaba, which raised $25 billion on Wall Street in 2014. Aramco could reach a market valuation of $2 trillion, and will be offering up 1%-3% in the IPO, meaning it will only need to sell less than 2% of its shares to break the record. However, there’s a good chance it won’t stop there, as Aramco could raise $45 billion – nearly double what Alibaba raised. Aramco is listed on the Riyadh Stock Exchange, and is traded under the ticker symbol SAOC.

It is quite simple to get an idea of just how big Aramco is when comparing it to some of the largest companies in the world. When it comes to cash flow, the petrochemical company also blows its competition out of the water: Over the first three quarters of 2019, the company had a net income of $68 billion. In comparison, Exxon Mobil made $8.7 billion over the same time period. In 2018, Aramco reported net income of $111 billion, almost twice that of Apple. 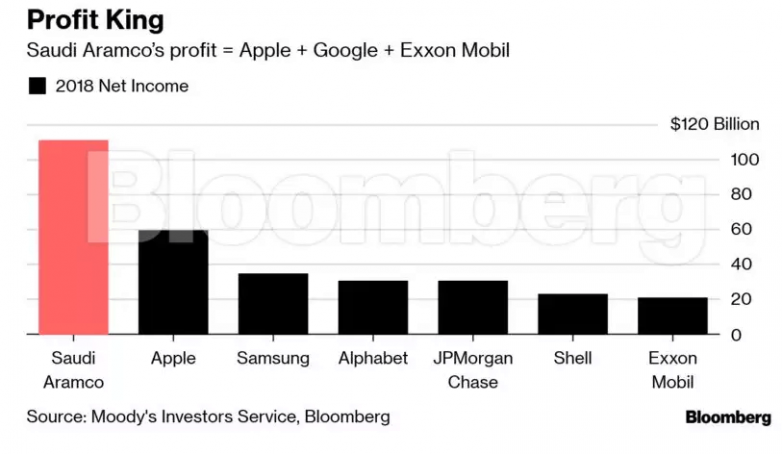 What is Saudi Aramco?

Aramco is not only the world’s largest energy producer, it is also an oil refinery, and the owner of a massive, 260 billion barrel reservoir. To put that into perspective, the United State’s entire crude oil stockpile is 24 billion barrels – less than 10% that of Aramco. Aramco produces 13.6 million barrels each day and is also sitting on a 186 trillion cubic feet gas reservoir. 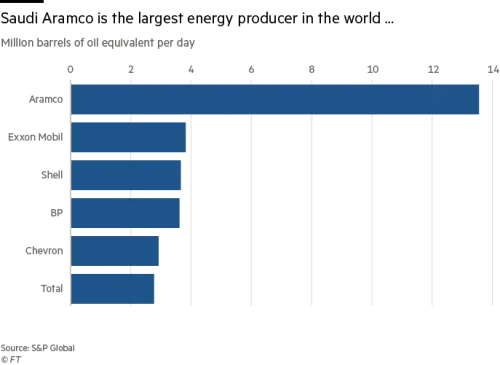 How to trade Aramco

Saudi Aramco will be available for trading on eToro once proper liquidity is provided. Until then, you can add it to your watchlist. Once the market opens, it will be traded as any other market on eToro.

Go to Aramco on eToro

75% of retail investor accounts lose money when trading CFDs with this provider. You should consider whether you can afford to take the high risk of losing your money.

It is important to note that the Saudi Aramco chart could be susceptible to various factors in world markets. The Saudi Aramco share price could fluctuate in accordance with global oil prices and the fact that it is government-owned may also contribute to the stock’s volatility. Other nations may also want a slice of the Aramco cake, including China, which has expressed an interest in investing billions as part of the IPO. To stay updated on the most recent Saudi Aramco price, add it to your eToro watchlist.