The price of gold is pushing towards a fresh peak above $1,750, maintaining its recent momentum following Federal Reserve chairman Jerome Powell’s downbeat speech in the US earlier this week. Gold has been in a sideways channel over the last month testing the seven year highs on a couple of occasions and retreating. Now it is challenging that resistance level again, looking for a breakout to take the price a leg higher. 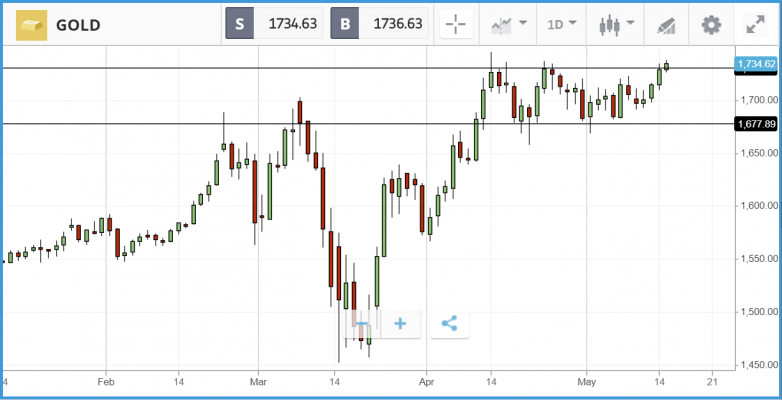 The precious metal has risen almost 40% in the last year, outperforming nearly every major asset class, as investors have flocked to safety amid skyrocketing valuations in equity markets and, more recently, the global pandemic.

The latest move higher this week comes after Fed chair Powell questioned the pace of the economic recovery post pandemic, warning the effects of the lockdown could be deep and long-lasting.

More economic woe is coming through on a weekly basis, and yesterday the weekly initial jobless claim figure for the US came in at three million, taking the total number of people who have filed for unemployment benefits since mid-March to 36.5 million. It was the eighth week running that the number of claims decreased, having peaked at 6.9 million during the last week of March. But while the figures are improving, some industry leaders are concerned that the models used to predict the economic damage of the crisis are unreliable, given the unprecedented nature of the current shutdown. Yesterday, the chief executive of PNC — a large American commercial bank — told the Financial Times that his firm’s decision to sell a $17bn stake in asset manager BlackRock this month was prompted by growing fears over the US economy. “Even if credit losses aren’t that severe, the earning potential of banks in a zero rate environment … is going to be pretty tough,” he said.

Yesterday also saw the Centers for Disease Control and Prevention release documents offering guidance on how schools, restaurants and other businesses can be reopened. There has been a battle on between the CDC and the White House, with the latter fighting for less detailed guidelines that leave more power with state governors to make decisions on specifics.

US stocks snapped this week’s losing streak yesterday, with the S&P 500 gaining 1.2% and the Dow Jones Industrial Average closing 1.6% higher. The rally came despite President Trump suggesting that the US could cut off its “whole relationship” with China, as tensions rise between the two countries over the latter’s initial handling of the coronavirus pandemic. In the S&P 500, 10 of 11 sectors were in the green yesterday, with the financials sector the biggest winner at a 2.6% gain.

Consumer finance names led the way, jumping 8%, while bank stocks gained 4.1%. Wells Fargo, which had hit its lowest share price in more than a decade this week, jumped 6.8%. The banking giant was also the subject of deal rumours after a speculative report suggesting it might be merging with Goldman Sachs. Those rumours were quickly shot down by JPMorgan analyst Vivek Juneja, who pointed out several regulatory hurdles that would make such a combination illegal.

In the Dow, American Express, UnitedHealth and Cisco were the day’s biggest climbers.

London-listed stocks sank sharply yesterday following Federal Reserve chairman Jerome Powell’s downbeat speech in the US on Wednesday. Additionally, in the UK, the Office for Budget Responsibility reported that the cost of government interventions to aid the economy will lead to a budget deficit of close to £300bn in the current financial year.

The FTSE 100, which closed down 2.8%, was dragged lower by 5% plus losses from names including business software firm Sage Group, insurer Admiral Group and pharmaceutical giant GlaxoSmithKline.

In the FTSE 250, which finished 3% down for the day, five names posted double digit declines. Transport firms were among the hardest hit, with FirstGroup, Stagecoach Group and National Express falling 13.6%, 13.4% and 9.2% respectively, after Citi downgraded its rating on Stagecoach to a sell. The firm argued that it expects consumer preferences to shift away from public transport even when the economic lockdown comes to an end.

JD.Com: Nasdaq-listed Chinese B2B e-commerce firm JD.Com reports its first quarter earnings this morning New York time, before US markets open. The firm is a clear beneficiary of shoppers shifting to online options, and its share price is up close to 40% in 2020 as a result. Investors will be watching closely for signs of how sustainable any additional business the firm has gained during the pandemic is now that China has begun to reopen. Currently, 37 analysts rate the stock as a buy, up from 32 three months ago, with five rating it as an overweight and five as a hold.

VF Corporation: VF is the firm behind brands including The North Face, Timberland and Vans. Its share price has sunk more than 40% year-to-date, as the mass lockdown has massively curtailed consumer spending on clothing items. The firm reports its latest quarterly earnings this morning US time, investors will be watching for how sales in China are recovering, in addition to how its global supply chain has been affected by the pandemic disruption. Analyst expectations for the firm’s earnings per share figure for the first quarter of calendar 2020 (the company’s fiscal Q4) have sunk from $0.50 three months ago to $0.18 now. In the following quarter, analysts expect the firm to deliver a $0.34 loss per share.

April retail sales: All eyes will be on US April retail sales data, which will be released today. Economists are anticipating that April sales will have declined by 12.3% month-over-month, versus a record 8.7% in March. The retail sales data accounts for around a third of US GDP, and the figures will start to paint a picture of how severe the world’s largest economy’s Q2 contraction is likely to be. April’s sales data will provide the most direct look yet at consumer behaviour in an economy that was under near total lockdown.

Ripplenet, the global payments network, has announced plans to offer members a loan product and is advertising a new role for someone to lead the project.

By venturing into lending, Ripple is shifting away from its sole focus on cross-border payments, with this latest news coming after the company’s CEO Brad Garlinghouse said that Ripple could branch out into other industry niches. The company said in the advert that it is looking for a seasoned director of product management who will help to bring its loans ‘from concept to  launch.’

The news comes as major cryptoassets soared back towards recent highs overnight. Bitcoin hit a day high of $9,627, while Ethereum was back above $200 at one stage, before settling just below this level.

All data, figures & charts are valid as of 15/05/2020. All trading carries risk. Only risk capital you can afford to lose.