Stock markets globally gained yesterday as Democratic nominee Joe Biden neared victory in the US presidential election. On a monumental day that saw Biden gather the most votes of any Presidential candidate in history, US stock futures then extended those gains yesterday evening as more states turned blue. The big winners were technology giants and the healthcare sector, which may well end up with their dream scenario of a Biden White House and a Republican-controlled Senate. Without both houses, Biden’s ability to pass tax increases and increase regulation will be restricted, while tech firms are eyeing a smoother relationship with China (which is crucial both to supply chains and as a market for tech products). If the Democrats fail to win a Senate majority, Biden will be restricted in his ability to reform healthcare and increase regulation there.

In the S&P 500 on Wednesday, the $6bn plus market cap healthcare sector gained 4.5% in response, while the $11trn information technology sector added 3.8%. The $5trn communication services sector, which includes social media firms such as Facebook and Twitter, also added more than 4%.

Overnight, Asian markets were firmer, with the Japanese Nikkei and Hong Kong’s Hang Seng up 1.7% and 2.8% respectively. European markets have followed suit, with most major bourses showing gains and US futures signalling a strong open, particularly the tech heavy Nasdaq set to build on yesterday’s rally, up 2.2%. 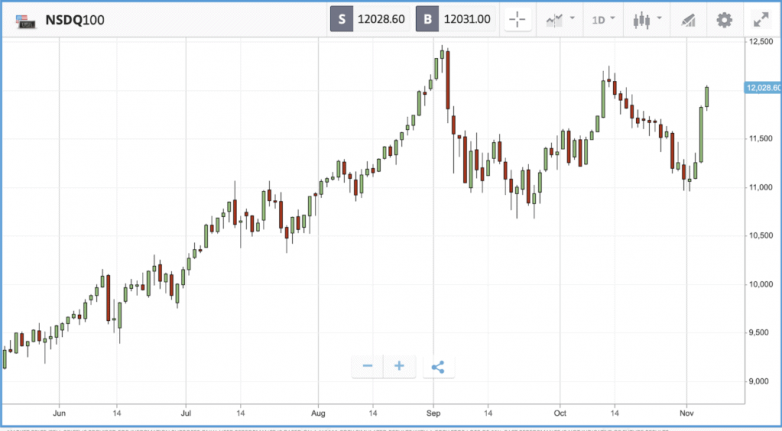 Biogen up more than 40% after news of likely drug approval

All three major US stock indices advanced substantially yesterday, with the Nasdaq Composite’s 3.9% rally taking it close to 30% year-to-date gain once more. Biogen was one of the biggest winners in the index, for reasons that had nothing to do with the election. The stock surged more than 40% after it was reported that US regulators have enough data to support approval of the company’s experimental Alzheimer’s drug Aducanumab. Facebook, PayPal and Amazon all made up substantial ground too, finishing the day 8.3%, 8.1% and 6.3% respectively.

The Dow Jones Industrial Average – which closed the day 1.3% higher – was a case of famine and feast. Health provider UnitedHealth Group led the way with a 10.3% gain, followed by 5.7% for Salesforce and 4.8% for Microsoft. At the other end of the spectrum, more economically sensitive stocks fell, including construction equipment maker Caterpillar and chemicals firm Dow. The pair ended the day 7.4% and 4.7% lower respectively.

Both the FTSE 100 and FTSE 250 gained 1.7%, ahead of England entering into its new minimum month-long lockdown today.

In the FTSE 100, AstraZeneca led the way with a 6.9% gain, riding the same wave as US healthcare stocks. Internet security firm Avast, Ocado Group and Next were the next biggest winners in the FTSE, closing the day 6.3%, 5.4% and 5.2% respectively. At the bottom of the index were banking names, with Standard Chartered, HSBC, Barclays, Lloyds and Natwest all losing 2% or more.

Alongside the US economic news, investors had to digest data that showed the British economy is heading for a double-dip recession this winter. The IHS Markit/Cips monthly survey of the services sector showed the recovery stalled in October (the UK economy is dominated by the services sector). The Bank of England has now moved the announcement of its November interest rate decision forward to this morning to avoid clashing with the Chancellor’s announcement of the latest round of Covid-19 stimulus measures.

Uber: Ride sharing and food delivery firm Uber has gained 37.8% year-to-date. While rides dropped off sharply due to the pandemic, the firm has benefited from huge demand for takeaway food delivery. Yesterday, the company’s share price jumped 14.6% after voters decided to exempt it and rival Lyft from a state labor law that would have required it to treat its drivers as employees rather than contractors. The vote lifts a cloud that has been hanging over Uber, as the cost ramifications of employee status in one of its largest markets would have been severe. Uber delivers its Q3 earnings update today after the market closes.

Alibaba: Alibaba’s quarterly earnings report today will be an interesting one, as it comes two days after the firm was forced to suspend the IPO of its finance arm Ant Financial – which includes the hugely popular Alipay service. The listing, planned for the Shanghai and Hong Kong exchanges (notably bypassing the US) was set to raise tens of billions, but the firm was forced to pull back after Chinese regulators raised questions about whether the firm met the qualifications for the Shanghai market. Alibaba itself has a US listing, the price of which fell 8% on Tuesday after the news broke. Wall Street analysts overwhelmingly favour a buy rating on the company’s stock.

Square: Payments firm Square has been a major beneficiary of the Covid-19 pandemic, with its share price up by more than 170% year-to-date. The company will report its Q3 earnings today after the market close, one point of interest may be the firm’s recent funding of a cryptocurrency wallets project. Driving Square’s growth has been its mobile payment service Cash App, which lets consumers send money, spend, save and invest without a bank. Currently, 22 analysts rate the stock as a buy or overweight, 17 as a hold, and five as an underweight and sell.

More than 80 firms with a market cap of more than $10bn report earnings in the US today, including Tmobile, Bristol Myers Squibb, Linde, Electronic Arts and more.

Bitcoin soared to its highest level since 2017 amid the US election results yesterday and overnight. The largest cryptoasset by market value broke through the $14,000 resistance level it has been flirting with for the last week as front-runner Joe Biden closed in on the White House.

This takes it to the highest price seen since the last day of 2017 when it traded above $16,000, before plunging to half that level in the space of a month.

Analysts say the real trend driving the price is a weakening US dollar which – having rallied marginally in the weeks running up to the election – has started to decline once more in the last week.

According to Bitcoinist, Dan Tapiero, a co-founder of 10T Holdings and DTAP Capital, thinks that the cryptocurrency will continue higher as a US dollar bear market plays out. He reportedly said the “unprecedented liquidity injection” may devalue the price of the dollar over time.

All data, figures & charts are valid as of 05/11/2020. All trading carries risk. Only risk capital you can afford to lose.