Best week for markets since April

Stock markets in the US and around the world soared last week, delivering their best week since April. The S&P 500, FTSE 100 and Eurostoxx 600 were up by 7.3%, 6% and 7% respectively. Before US election results began to be reported on Tuesday night, stocks had made gains on the back of optimistic polling data that raised the possibility of a “blue wave,” with the Democrats taking the White House, Senate and House of Representatives. The hope there was that Democrat control meant a faster path to a new fiscal stimulus package. However, while Joe Biden has now been confirmed as the new president and the Democrats have retained a majority in the House, control of the Senate is still up in the air – and may be until January. That raises the prospect of a so-called “goldilocks” scenario for investors, with less volatile leadership and an improved chance of stimulus, but a reduced likelihood of tax increases and regulation if the Democrats fail to take the Senate.

Overnight US stock futures were trading substantially higher, following Biden’s victory being confirmed on Saturday with all 3 major US bourses set to open 1.5% higher, the S&P 500 is within touching distance of the record high set back in September. European markets are also up as investors anticipate more stimulus and more ‘risk-on’ sentiment returns. 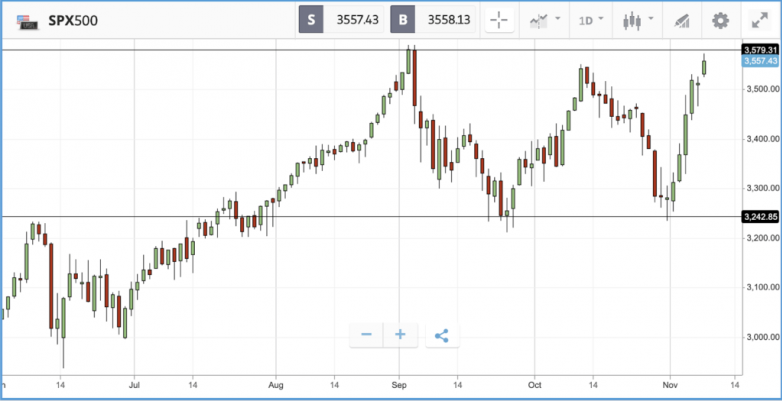 Also of note at the end of the week was October’s US jobs report, although it was overshadowed by election news. The unemployment rate fell from 7.9% in September to 6.9% in October, according to the Labor Department. In a Friday note, analysts at financial advice firm Edward Jones noted that the report shows the labor market is continuing to heal, although “slower than preferred.”

Sector-wise technology shares were the big winner in last week’s rally, with the S&P 500’s technology sector up by 9.7% as the prospect of a split government reduces the risk of increased regulation. That takes the sector’s year-to-date gain past 30%, versus the S&P 500’s 8.6% increase. As stocks soared, volatility – as measured by the Cboe Volatility Index (Vix) – fell by 35%, which is its sharpest weekly decline since April according to investment firm John Hancock.

Despite England going back into lockdown last week, London-listed shares followed their US counterparts higher last week, with both the FTSE 100 and FTSE 250 delivering substantial gains. Housebuilders were among the biggest winners in the FTSE 100 last week, as data from lenders Nationwide and Halifax showed the UK house prices rose at their fastest rate in years last month. Taylor Wimpey, Barratt Developments and Persimmon all posted double-digit returns, with Persimmon the top performer of the trio in 2020 so far. Its share price is down by less than 3% year-to-date, versus the 36% and 27% falls of Taylor Wimpey and Barratt. Similarly, in the FTSE 250, Crest Nicholson jumped by close to 20% last week but remains 40% down year-to-date.

Insurance firm RSA also made headlines last week after news of a takeover offer for the company broke, with its share price closing out the week more than 50% higher as a result.

McDonald’s: Fast food giant McDonald’s has done relatively well out of 2020, with its share price up by close to 10%, as while the pandemic has hurt the firm in some areas (such as breakfast demand and general foot traffic), it has done well out of food delivery and its drive-through locations. Heading into Q3 the firm had a major marketing push planned, so investors will be watching for the pay-off from that when the company delivers its latest set of quarterly earnings on Monday.

Beyond Meat: Plant-based meat substitute firm Beyond has more than doubled its share price in 2020, despite operating in an increasingly competitive field. When the firm delivers its Q3 earnings update on Monday, key points to watch will be details on any new partnerships the firm has inked – in particular the status of its relationship with McDonald’s (following a trial at the firm’s locations in Canada). Currently, Wall Street analysts favour a hold rating on the stock.

Why the Senate race matters

One US political battle that has not yet been decided is whether the Democratic Party or Republican Party will have a majority in the 100-seat US senate. The Democrats had to make up ground to take back control, which so far they have failed to do. However, for both of Georgia’s seats no candidate reached the required 50% threshold to win. To resolve that, two run-off elections will take place at the beginning of January. If the Democrats can win both seats, that will lead to a 50-50 tie between the parties, with Democrat vice-president Kamala Harris the tie-breaker.

The outcome of these races will have significant ramifications for investors. With Senate control, tax and regulatory overhauls are all on the table for the Democrats, but the likelihood of a major fiscal stimulus package goes up too. How markets would react depends on how much investors buy into the “Goldilocks scenario” set out above between now and January.

The US Government has seized $1 billion in bitcoin – the largest seizure of the cryptoasset ever – connected to dark web marketplace Silk Road, according to The Guardian.

The US Department of Justice (DoJ) announced it had tracked down the holder of the cryptoassets who it refers to as ‘Individual X’. The bitcoins were transferred to Individual X in 2015 by Ross Ulbricht, the founder of Silk Road, ahead of his arrest for illicit activities. The DoJ has been attempting to track it down ever since.

The value of bitcoin is much higher today than when it was transferred from Ulbricht. The DoJ says the unnamed holder kept the cryptoasset until today, where it is worth some $1 billion, up from around $23,700 when it was initially sent. The seizure has a higher fiat currency value than all the seizures made by the DoJ in 2015, the last year for when records are available.

All data, figures & charts are valid as of 09/11/2020. All trading carries risk. Only risk capital you can afford to lose