European markets have opened positively once again this morning, carrying on the momentum from this week’s vaccine news albeit in a slightly more subdued fashion. The FTSE is up a quarter of a percent and US futures are signalling they will open up between 0.6 and 0.8%. The Nasdaq is looking the strongest of the three, after tech names sold off in favour of the beaten down value stocks that would benefit most from a Covid vaccine.

Tuesday was a calmer day in markets after Monday’s rally, with the S&P 500 close to flat. Boeing and Chevron were once again among the leaders in the Dow, gaining 5.2% and 4.6% respectively. That takes Boeing’s gain over the past week to 22.8%, with Chevron up 15.8% over the same period. Monday’s Covid-19 vaccine news has boosted both the prospects for international travel and the price of oil – which is now sitting comfortably above $40 a barrel. At the other end of the spectrum, Microsoft closed the day 3.4% lower, Zoom Video Communications was down 9%, and Nvidia lost 6.3%. 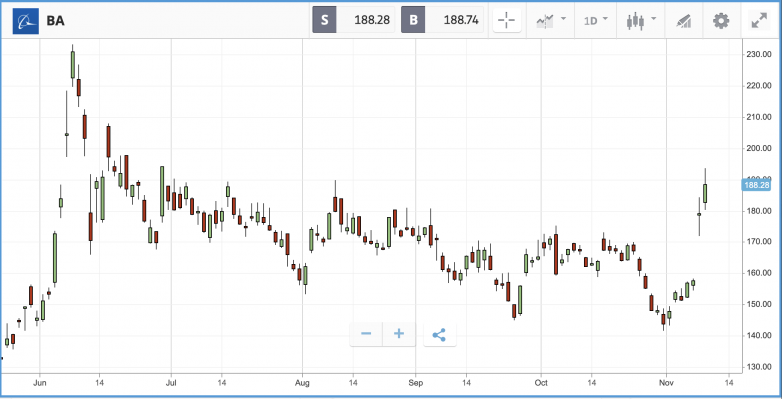 Politically, a new risk is emerging: the refusal of the Trump administration to begin transition proceedings for President-elect Joe Biden. With US Covid-19 cases running at record levels, a transition process without information sharing and cooperation from the incumbent could get messy.

Lyft says it will be profitable by the end of 2021

One stock making moves in after-hours trading on Tuesday was Lyft, after it predicted that the company will be profitable by the end of 2021 even if the recovery from Covid-19 is sluggish and ride volume doesn’t reach its previous highs. Having closed the day down 4.4%, Lyft stock jumped by more than 6% in late trading following its update.

The cruise sector faced a worse Tuesday, after Norwegian Cruise Line, Royal Caribbean and Carnival all jumped by more than 25% on Monday following Pfizer’s vaccine update. The trio fell back yesterday, by 6.6%, 2.3% and 13.1% respectively.  Carnival was one catalyst for the sell-off, as the firm took advantage of Monday’s rally to announce it has filed for a new stock offering to raise capital. For its part, Norwegian delivered a disappointing set of quarterly earnings.

London-listed stocks continued to rally yesterday, with the FTSE 100 up 1.8% and the FTSE 250 gaining 0.9%. BT Group led the FTSE 100 with a 12.5% gain, followed by 7.8% for packaging company DS Smith. Year-to-date, BT is still down 38%, although it has added 18% in the past week alone. Similar to the US, financial and energy names were also among Tuesday’s winners, with BP up 5.1% and Barclays gaining 4.6%. At the bottom of the FTSE, Ocado Group continued its tumble, closing the day 5.2% lower. The online grocery delivery firm is now down by double digits over both the past week and last month, although remains up by close to 70% in 2020.

The FTSE 250 was led to a 0.9% gain on Tuesday by outsourcing firm Capita and Cineworld, which climbed 26.9% and 18.1% respectively. Capita’s share price has been decimated by the Covid-19 pandemic and remains 80% down year-to-date despite a 30% plus rally over the last week.

Air Products and Chemicals: Gas and chemicals company Air Products & Chemicals has added 31.9% to its share price in 2020 so far, as the necessity of its products has offered it protection against the Covid-19 pandemic. This week, the firm said that it plans to launch a new liquid hydrogen production plant in China in 2022, the first of its kind in China and the largest in Asia. Air Products reports its latest set of quarterly earnings today. Currently, analysts are roughly evenly split between buy and hold ratings on the stock.

Manulife: Along with other financial names, insurance firm Manulife has made gains as part of the broader value stock rally. The firm’s share price is down 16.9% year-to-date, after a 16.4% gain over the past five trading days. Manulife delivers its latest quarterly earnings update today, investors will be keen to hear management’s take on what the Pfizer vaccine news means for a return to economic reality. Currently, 10 Wall Street analysts rate the stock as a buy, and five as a hold.

UK GDP: On Thursday at 7am, preliminary Q3 GDP growth data in the UK will be reported, with quarter-over-quarter and year-over-year figures available. Consensus estimates are for a 15.8% quarter-over-quarter gain, and a 9.4% loss year-over-year, according to Trading Economics. That compares to Q2’s 19.8% loss QoQ and 21.5% loss YoY. Investors will be watching for how different sectors performed after the British economy reopened, prior to the most recent lockdown that began in England last week.

Gensler has been a routinely outspoken advocate of cryptoassets according to CoinDesk, speaking on the topic on multiple occasions and coming to the defence of cryptoassets in front of congressional hearings. He has defended the status of cryptoassets such as Libra and Ripple as securities rather than Ponzi schemes and has referred to blockchain technology as a “change catalyst” in an op-ed for CoinDesk.

Gensler is most well-known for his part in the Obama administration as a regulator defining key derivatives rules after the 2008 financial crisis. Before that, he served in the US Treasury Department during Bill Clinton’s presidency.

All data, figures & charts are valid as of 11/11/2020. All trading carries risk. Only risk capital you can afford to lose.