Salesforce’s talks of a deal with workplace communications firm Slack dominated headlines late last week, but an even bigger deal was reported over the weekend. Per The WSJ, financial information firm S&P Global is in advanced talks to buy fellow data giant IHS Markit for $44bn. If that price stands, the deal would be the largest in the US this year.

In other headlines, short-term rentals platform Airbnb and food delivery firm DoorDash are set to reveal higher-than-expected valuation ranges for their initial public offerings in roadshows this week. Bloomberg reported that Airbnb will target a valuation range of $30bn to $33bn, while DoorDash shoots for $25bn to $28bn. A host of companies are currently pushing to complete IPOs before the end of the year, including loan company Affirm, discount retailer Wish and gaming company Roblox.

US markets were closed on Thursday for the Thanksgiving holiday and trading volume on Friday was muted, with much of corporate America still shut for the day. The Dow Jones Industrial Average fell just short of closing the week past the 30,000 point milestone it had hit earlier in the week but added 1.5% over the course of the week. Similarly, the S&P 500 added 1.6%, while the Nasdaq Composite surged by 2.5% to take its year-to-date gain past the 35% mark.

In a Friday note, analysts at investment firm John Hancock noted that it was the fourth straight week of gains for crude oil prices, which hit their highest level in more than eight months, while initial weekly jobless claim figures reached their highest level in five weeks. With Q3 earnings season drawing to a close, John Hancock also noted that the 6% decline in S&P 500 earnings for the quarter was largely driven by just three industries: oil and gas, airlines, and the hotel, restaurant and leisure sector. Taking those three industries out of the 63 in the S&P 500, and the remaining companies would have delivered earnings growth rather than a decline.

London-listed stocks were close to flat last week, having made double-digit gains over the past month. There were some significant winners and losers last week, however. Oil giants BP and Royal Dutch Shell both rode the surging oil price to significant weekly share price gains. BP added 7.6%, taking its one-month gain to 33.7%, while Royal Dutch Shell added 9% with its one-month gain standing at 40.4%. Miner Antofagasta and Rolls-Royce were among the other big winners of the week, with gains of 9% and 8.3% respectively. At the other end of the spectrum, credit checking firm Experian suffered a tough week after delivering its half-year earnings, with its share price down 11.1%.

In the FTSE 250, Cineworld, travel firm Tui, cruise company Carnival, and easyJet all delivered significant gains. Cineworld added 27.4%, taking its one-month gain past the 100% mark (although it remains more than 70% in the red for 2020), following news that it has secured a financing lifeline.

Zoom Video Communications: Investors in video communications company Zoom have been handsomely rewarded this year, with its year-to-date share price gain close to the 600% mark, as mass working from home has led to huge demand for virtual meeting tools. The company delivers its latest set of quarterly earnings on Monday, where there will be several key points of focus. First, investors will be watching for what has happened to new user rates as the pandemic has continued, but perhaps more important will be the company’s success at converting free users to paying subscribers. After its rapid share price gains, Wall Street analysts are split between buy and hold ratings on the stock.

With many consumers choosing to (or being forced to) shop from home, online Black Friday sales are set to hit a record high this year. According to data from Adobe Analytics, the total is on pace to come in at between $8.9bn and $9.6bn, an increase of more than 20% versus last year. Per the data, 42% of sales came in from smartphones, with retailers offering curbside pickup and faster delivery methods enjoying the biggest sales boost. For retailers still reliant on bricks and mortar operations, the news was less positive. The WSJ reported that firms who track foot traffic estimated that roughly half as many people visited stores on Black Friday versus last year. 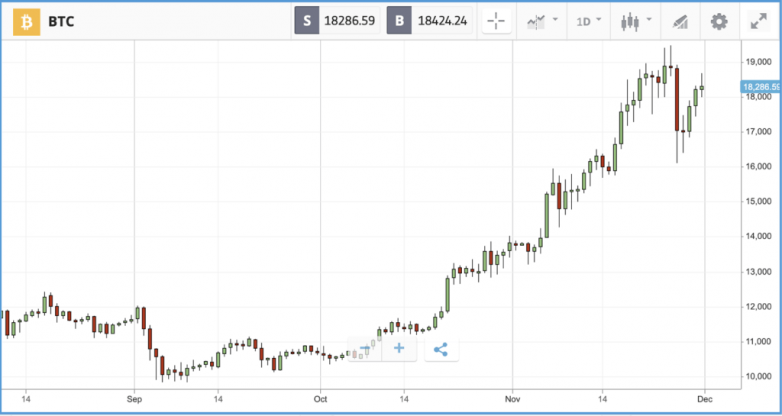 In a report published on Medium, Pantera cites the entry of PayPal to the market has caused demand for the world’s largest cryptoasset to surge. The report’s author claims: “When PayPal went live, volume started exploding. The increase in itBit volume implies that within four weeks of going live, PayPal is already buying almost 70% of the new supply of bitcoins.

PayPal launched cryptoasset services in the US earlier in November, with users able to trade up to $20,000-worth of the cryptoasset per transaction.