Bitcoin surged to a new all-time high of $19,712. Its adoption by payments giant PayPal, as well as its role in portfolios as a safe haven which can offer diversification away from other assets like equities and bonds, have caused a huge run up in its value this year. 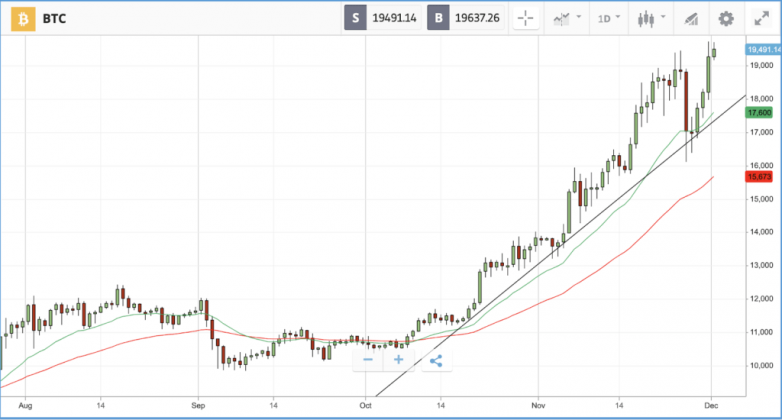 It’s one year return is now over 170%, despite a minor pullback overnight, and experts continue to believe it can go higher still.

Speaking to the Telegraph, Simon Peters at eToro said there was more to come. “Bitcoin has broken through a critical price milestone and looks set to move higher. Three years on from its 2017 peak, the cryptoasset industry has matured and is seeing real traction with larger investors.

“They are using Bitcoin as a hedge to combat the prospect of higher inflation and continued government stimulus.”

On Monday the Dow Jones Industrial Average, which is comprised of 30 large US stocks, closed out its best month in more than 30 years. Over the course of November, the index rose 12%, its best month since January 1987. Names including Chevron, JPMorgan and American Express helped propel the Dow higher, with November gains of 21.5%, 14% and 23.2% respectively. The record month came despite the index falling by 0.9% on Monday, with Chevron the biggest loser at -4.5%. Chevron’s fall coincided with rival Exxon announcing it had cut planned spending and written off $20bn of assets in the fourth quarter. Originally, Exxon had planned to spend $16bn to $19bn next year, and $20bn to $25bn annually until 2025, according to the FT. That is down from an original $30bn to $35bn budget. Exxon stock closed the day out 5.1% lower following the news, although it is still up 14.1% over the past month.

In after-hours trading, Zoom shares dropped 5% to leave them 20% off peaks seen just six weeks ago, despite a fourfold jump in revenues compared to 2019’s equivalent quarter. Nonetheless, its share price remains up more than 700% in the last year.

The S&P 500 fell back by 0.5% on Monday, with energy stocks by far the biggest drag on the index. In the S&P, the energy sector fell back by 5.4% overall. In addition to the Exxon news, oil cartel Opec and its allies delayed a meeting intended to push back a planned output increase as there are disagreements among the group. At the top of the index was IHS Markit, which jumped 7.4% on news of its acquisition by S&P Global. It was followed by chipmaker Advanced Micro Devices, which gained 6.3%.

In corporate news, General Motors announced that it is scaling down its deal with electric truck maker Nikola and will no longer take a stake in the company. GM will still provide fuel-cell technology but will not be building an electric pickup truck for the company. The dialing down of the deal follows a report from a short-seller raising questions about the firm’s technology and the progress it has made. After GM announced the revised deal, the firm’s share price fell back 2.7%, while Nikola slumped by 26.9%.

In the FTSE 100, insurer Phoenix Group and food-service business Compass Group were the biggest losers, closing the day 8.8% and 6.6%. They were followed by BP and Royal Dutch Shell, which followed US oil stocks, with both losing more than 5%. At the other end of the spectrum, JD Sports Fashion gained 5.9% after reports that it is stepping away from a rumoured deal to take over troubled department store Debenhams.

In the FTSE 250, investment firm Ninety One, Cruise Line Carnival and retail firm Frasers Group fell hardest on Monday, with all three sinking by around 6%.

Salesforce: Certain to be front and center of Salesforce’s earnings call today will be reports that the firm is planning to acquire workplace messaging service Slack. If the deal is going ahead, how the company plans to integrate Slack into its other business software products, and the valuation placed on Slack after the firm’s mammoth share price run-up in 2020, will all be key. In its last quarterly results, Salesforce delivered a major earnings beat, and currently Wall Street analysts lean heavily towards a buy rating on the stock. Year-to-date, Salesforce stock is up more than 50%, but it has fallen 12.6% over the past three months.

Hewlett Packard Enterprise: Not to be confused with personal computer maker HP Inc, HP Enterprise (the result of a 2015 spin-off) is a separate company that offers servers, cloud services, networking and other services to businesses. HP Enterprise stock is down 30% in 2020 so far, despite booming demand for cloud services, as the company has been in perennial restructure mode and operates in markets where it faces stiff competition. Its supply chain has also been challenged by the pandemic, and the company is on the receiving end of businesses cutting back on IT spending. Wall Street analysts overwhelmingly favour a hold rating on the stock.

Mnuchin and Powell Congress testimony: US Treasury Secretary Steven Mnuchin and Federal Reserve chairman Jerome Powell will both appear before Congress today, they are expected to offer starkly different viewpoints on the state of the US economic recovery. Mnuchin is at the end of his tenure, with a new administration inbound, and in pre-released testimony on Monday hailed the progress made in the economic recovery so far. In his pre-released testimony, Powell struck a more cautious tone, pointing to surging Covid-19 cases in the US and abroad.